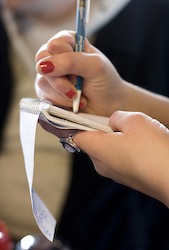 My daily routine is centered around a paper tablet.  I keep track of my to-do items, record important notes, and write down new ideas.  I love having the ability to write things down as they enter my mind and simply flipping back a few pages to remember what I did the day before.  My reliance on a paper tablet leads me to believe that a simple, low-cost device the size of an ebook reader with the ability to record and share written notes could transform our daily operations.  The handwritten word may live to see another day.

The “ink pad” would be a simple, practical, and useful device.  It would not be like the overkill electronic journal we’ve seen in mock-up videos from Microsoft’s Courier.  This inkable tablet would finally satisfy what’s been missing with traditional Tablet PCs.

I love Tablet PCs.  They’re a lot of fun to use and play around with, but they are largely impractical for most folks.  Most people do not want to lug around a full-fledged computer to keep notes for work or class.  Programs like Microsoft’s OneNote are extremely functional but also over complicated for the average worker.  The inkpad would require no prior knowledge to operate other than that required to use a paper tablet and ink pen.

The primary method of input would be a stylus and the main function would be recording notes.  It would resemble a traditional notepad in size and design.  It would differ from the rumored Apple Tablet and Crunchpad as those devices focus on media and entertainment.  The inkpad would focus on productivity, handwriting, and drawings; there would be no need for 3D rendering capabilities, extreme gaming, or HD video viewing.  The name of the game would be note taking and the focus of this device would be as a tool rather than an instrument of pleasure. 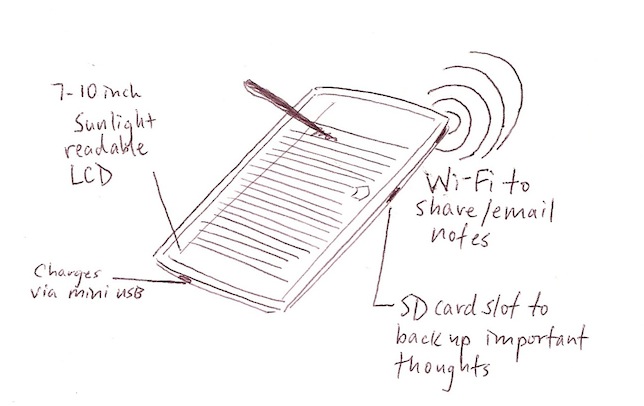 Here is a list of features that would make the inkpad useful in our daily lives: 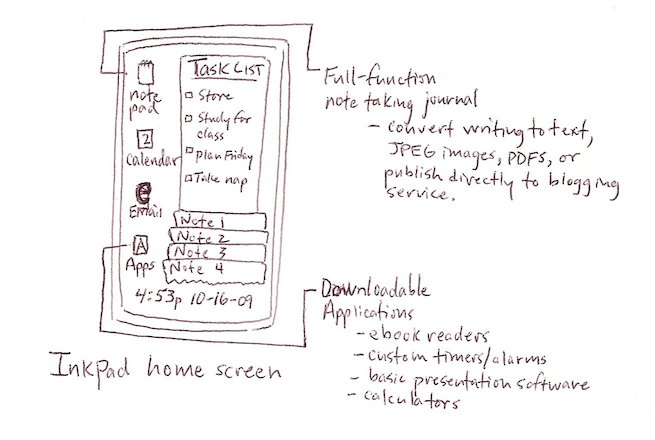 The inkpad could make our daily routines better by having the ability to easily share and back up important notes while reducing our dependence on paper products.  This device could be a success in business, education, and our personal lives.  Why isn’t this already on the market?  For $150 bucks and never having to buy another paper tablet or agenda/planner, who wouldn’t pick up one of these?

What additional features would you suggest for the inkpad and do you think it has a place?