Those who spend a lot of time behind the wheel of a car and want to multitask away on their phone while driving may look on to Siri with envy if they don’t already own an iPhone 4S. Thankfully, third-party developers for Windows Phone 7 have come up with a solution for Microsoft’s mobile platform in the form of Ask Ziggy, a voice-based personal assistant application that is similar in functionality to Apple’s native Siri.

Ask Ziggy is available free of charge in Microsoft’s Marketplace right now, and is ad-free.

According to the developers of Ask Ziggy, who have spoken with WP Central regarding the app, this is how Siri’s competition will work on your Windows Phone handset: 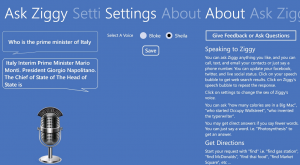 Ask Ziggy uses Speech Recognition to translate human speech into transcribed text, which is displayed in a speech bubble. The transcribed text is analyzed for patterns to detect commands or general queries. Commands are interpreted and routed to routine phone tasks such as emailing, texting, calling, social network updates, and getting directions.

When a general question is asked, a mixture of mash up technologies and web scraping is employed to search the web for relevant responses. Pattern matching is used to summarize a direct answer from a web page. Several passes may be required to find a concise answer. A direct answer is then spoken out loud, and displayed in a speech bubble. When a direct answer cannot be summarized the user is prompted by speech to click on their search bubble to see web search results based on their spoken query.

Unfortunately, though, you’ll still have to maneuver to the app itself using your phone’s touchscreen, unlike Siri, which can be activated with the hardware home button.

I tried Ask Ziggy on the Nokia Lumia 800 Windows Phone and the app performs as expected. It’s still not as elegant or simple as Siri and does require some screen taps to see web search results.