Apple’s Retina Display on its iPad Air and refreshed iPad mini already packs in some of the highest pixel densities on the market today, but Meizu’s next generation of Android handset will be ushering in a new era where premium phones will begin packing more pixels than the 3-million pixels found on Apple’s class-leading tablets. Boasting a 500 pixel-per-inch, or PPI, the 5.5-inch Meizu MX4G may not be readily available for U.S. consumers, but the device could show a trend where flagship devices will be pushing beyond the 1080p full HD screen resolutions on today’s models, like those on the HTC One, Samsung Galaxy S4, and the LG G2 among others. 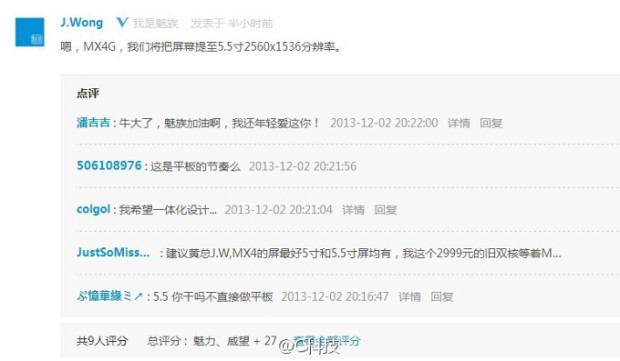 True 4K Ultra HD (UHD) displays, for another comparison, come with a resolution of 3840 X 2160 pixels. This means that the Meizu MX4G smartphone will have nearly as many pixels as a much larger 50-inch UHD 4K TV, but on a 5.5-inch panel that conveniently fits into your purse, bag, or pocket.

The device is expected to debut sometime next year, according to a report on Phone Arena, though at this point it’s unclear when Meizu’s bigger named rivals–LG, Samsung, HTC, Sony, and others–will be joining it in the war for more pixels on displays. As we head into 2014, flagships will likely push beyond the 1080p HD resolution of 2013, and it will only be a matter of time until more smartphones are released with this ultra-sharp, super-crisp display.

With larger phablets and higher resolution screens, a component that’s sorely missing from Google’s Android OS would be phablet support. Currently, apps run in either a single pane smartphone-optimized layout or a multi-pane (usually with two panels) in tablet optimized formatting. With phablets, many apps don’t really make use of the extra screen real estate and/or resolution and run in smartphone layout. If Google builds a phablet mode for apps to allow users to choose between smartphone or tablet layout, a better phablet experience could be had. If you want bigger fonts and a simpler layout, you could choose to run apps on a 5.5-inch display with a smartphone-centric UI whereas if you want to do more and have a more desktop-like experience, you can force apps to display in tablet-mode, giving you multi-panes.