Delayed messaging syncing and unstable connections could be a thing of the post for Skype users. At least, that’s what the company hopes will happen after it changes the underlying architecture of the service over the next year.

Skype formally announced the changes on its Big Blog this past week. Dubbed Skype Cloud, the company hopes that offloading some of the processes involved in connecting users will help it keep the messaging service’s performance on mobile devices reasonably low. Right now, placing audio or video calls on Skype depends on the bandwidth and processing power of the devices on the call.

Since the new Skype Cloud back-end will act as the backbone of the service going forward, users should find Skype apps less processor and intensive and more battery efficient. That’s particularly important on tablets and smartphones, where battery life is at a premium and a growing number of the service’s calls are placed.

Skype says that the new back-end has allowed it to introduce new features, citing the service’s integration with Outlook.com as one example of the things Skype Cloud enables. In the future, Skype says that its new back-end allow messages to sync between devices. Unfortunately, it isn’t sharing a timetable for this. Like most new features in Skype, syncing will roll out over the “next few months” to each Skype app. Missed call messages will also sync between different devices too. 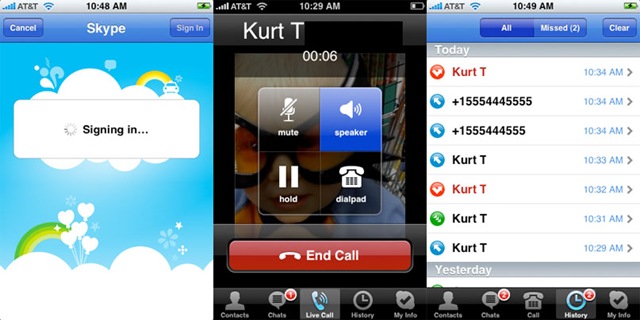 Although these changes to Skype will benefit all users, they’ll come as particularly great news for anyone using Microsoft’s products. Since purchasing the service in 2011, Microsoft has slowly integrated it into its portfolio of products, sometimes with mixed results. The company officially discontinued Windows Messenger in favor of Skype earlier this year. Since then, Windows 8 and Windows Phone users have had to endure multiple notifications for the same messages. The only way to stop these messages is to uninstall or never install Skype, or uninstall Windows Messenger and all the other built-in Windows applications that depend on it.

Skype was careful to calm fears about having users’ call information stored on its servers. The company says that it takes its “responsibilities with regard to this data seriously, and to help secure and protect it, [they] apply strong physical, technical and administrative security protections” to data they store.