The latest MetaWatch catches up to the Pebble smartwatch by adding iPhone support and Bluetooth 4.0.

The new MetaWatch still has Bluetooth 2.1 to connect to Android devices. It also has a 96×96 fully reflective LCD display, six programmable buttons, an accelerometer, vibration motor, and ambient light sensor. It’s available now in black or white for $199.99. 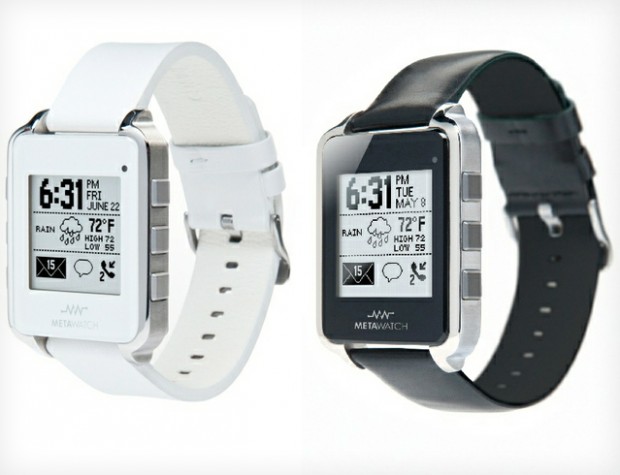 According to The Verge, while the watches are available, they’re still intended for “developers and tinkerers.” Smartwatches are becoming more mainstream after the hugely successful Pebble, but MetaWatch isn’t ready to say the watch is for everyone just yet. The watch likely isn’t stable enough for everyday use, but hopefully will be soon.

Even with the smartwatch intended for developers, MetaWatch can claim it shipped the first smartwatch with Bluetooth 4.0 and iPhone support, simply because the Pebble is still a few months away from shipping.

There are several differences between the MetaWatch and Pebble, mostly dealing with the screen and number of buttons. The Pebble uses an e-paper display while the MetaWatch uses a highly reflective LCD. The MetaWatch displays more information on the home screen, but users can modify the Pebble’s screen, so any developer can create a screen that looks like the MetaWatch’s.  The MetaWatch also has more options for input, with six buttons as opposed to three.

Users that didn’t get in on the Pebble’s Kickstarter before the device sold out could pick up a MetaWatch, but waiting for an official consumer-focused release of the MetaWatch, or the next available Pebble pre-order might be a better idea.