Mi-Co has announced the availability of Version 6 of Mi-Forms Software. Mi-Forms is an enterprise level data capture system and the new version provides enhancment for the form based solution. Here’s the press release: 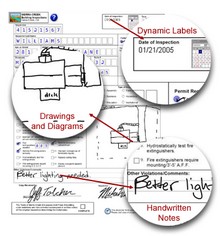 Building upon industry standards, the new release of the mobile forms based and hand writing recognition platform focuses on the Mi-Forms Enterprise Server, workflow enhancements, and support for Windows Mobile 5

“Mi-Forms Software is far from static,” stated Greg Clary, Mi-Co CEO, “and we have a commitment to our customers to add major features and enhancements to the system at least once a year. Version 6 of Mi-Forms fulfills that commitment by providing enterprise flexibility on the deployment of mobile data capture solutions. This flexibility is built with an eye toward enterprise standards such as XML, a .NET based architecture, web services based communications, and integration with enterprise products such as IBM Workplace Forms.”

The flexibility provided by Mi-Forms Version 6 can be found in each of the key processes in forms based data collection: Forms Design, Data Capture, Data Validation and Information Communication.

“Our large customers such as the USDA and Sutter Health make it clear that Mi-Forms must not only meet their short term needs in the mobile data capture arena but provide a flexible platform to meet unexpected and future needs,” stated Chris DiPierro, Director of Software Development, “and Version 6 is that flexible product offering.”

Forms Design : Organizations developing forms with the Mi-Forms Designer will find a number of improvements to increase flexibility and ease of use for staff developing forms. For example, Visual Studio 2005, while not required, is integrated with Mi-Forms Designer. Within Version 6, the new data palette concept allows designers to create forms by starting with existing data sources like an IBM Workplace Forms document, ODBC schema or XML schema, by bringing a representation of the data source directly into the Mi-Forms System.

Data Capture : While there are a number of Data Capture improvements in Version 6, the most visible is the support of Pocket PC running Windows Mobile 5. Mi-Co continues to lead the industry in providing device independence and the Pocket PCs running WM5 join the previously supported devices that include the Tablet PC, the Logitech io2 Digital Pen and BlueTooth Digital Pens. End users will also find enhancements associated with specific data capture activities. For example, a new narrative entry control and API allows users to more easily enter and have the system recognize comments and other narrative fields.

Data Validation : In the area of data validation and data quality, organizations have greater flexibility in determining the optimum method for checking for data input errors, errors in logic or errors identified through comparisons with previous data capture tasks. Business rules can now be run completely at the client level, completely at the server level or in any combination desired by the organization.

Information Communication : Organizations will have maximum flexibility in communicating data to other systems with the rich set of data exports provided in the Mi-Forms System (XML, CSV, ODBC, Microsoft Jet, PDF, BMP and other image formats as well as InkML—the industry standard ink format). Enhancements in Version 6 include the ability to write script driven datapaths on the Mi-Forms Server to access any proprietary database or any VB.NET supported file format. Data-driven workflows are now supported by Mi-Forms Client and Mi-Forms Server.

For a more detailed list of Mi-Forms Version 6 enhancements please go to www.mi-corporation.com