Microfy your SIM card with a meat cleaver 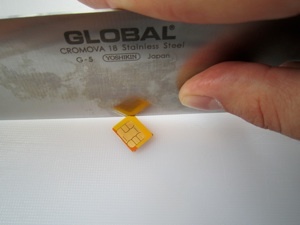 If you’ve got an iPad with 3G and are at a loss on how to get your own SIM or mini-SIM card to work with its micro-SIM port, a fellow named John Benson has a solution… and it involves a meat cleaver.

Actually, you could probably get by with a smaller cutting tool or a mini rotary tool (would come in handy for sanding), but John’s the one who put together the step-by-step guide, so we go with what he has. Plus, my general rule of doing what the guy holding the meat cleaver says applies.

The reason John is resorting to such measures is that he’s in the UK, so the AT&T SIM in his imported iPad 3G won’t do him much good (not that it’d necessarily do him much good here either. Bazinga!). The chopped up Vodofone SIM does the trick for him, and he’s got setting information for anyone else on Vodofone in the UK trying to duplicate his literal SIM card hack.