Even with many questioning the market share of Microsoft’s Surface RT tablet and the device’s success in defining Microsoft’s tablet strategy, it looks like the Windows-maker is already planning successors in the form of the Surface 2, the Surface Pro 2, and a new device called the Surface Book.

The three new devices are speculated to arrive sometime in 2013, and we’re guessing that the launch would be closer to the end of the year given that the Surface RT launched in October and the original Surface Pro will debut in January. 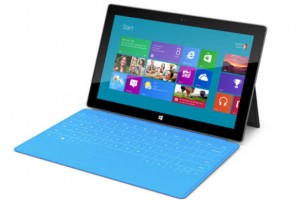 The Surface 2 will be the successor to the original Surface RT, and as such the tablet will run Windows RT. New to the device would be a smaller 8.6-inch display–compared to the 10.6-inch on today’s Surface RT. Also, the device will swap out the quad-core NVIDIA Tegra 3 processor for an un-named Qualcomm CPU of ARM architecture.

The Surface Book will be a new device with a large 14.6-inch touchscreen display. It will run Intel’s new 22 nm Haswell processor. It’s unclear how Microsoft will be positioning the Surface Book, but given the large dimensions and the ‘book’ moniker, this may be a more traditional clamshell note’book’ or laptop form factor with a touchscreen display whereas the Surface and Surface Pro lines are tablet first devices.

And according to Neowin, the Intel Haswell and AMD Temash chipsets won’t be ready until mid-year 2013, so that means that these devices won’t launch until at least then.