In an announcement to investors, Microsoft CEO Steve Ballmer details that the company will be changing its operating strategy from a maker of software to a company that makes both hardware and software. The strategy is not unlike that employed by Apple, which has long boasted the tight integration of software and hardware to create a unique user experience, and Google, who works with select OEMs to build the Nexus line of products and who has recently acquired Motorola Mobility to enter the smartphone manufacturing space.

While Ballmer’s specific words are nothing new–the company had released the Xbox and Zune franchises in the past and more recently had announced the Surface tablet hardware that will run on Windows 8 and Windows RT–the news does solidify what OEMs have been fearing. Select OEMs, like Acer, have expressed concerns about Microsoft entering the hardware space with the Surface as Microsoft will be competing directly with its hardware partners. For now, though, Microsoft is playing off its move as creating devices for specific purposes:

“There will be times when we build specific devices for specific purposes,” explains Ballmer. “In all our work with partners and on our own devices, we will focus relentlessly on delivering delightful, seamless experiences across hardware, software and services.” 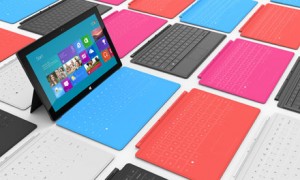 It has been previously reported that Microsoft’s decision to build its own branded Surface tablets was because OEMs failed to deliver the hardware-software integration that Microsoft had hoped for. Creating Surface would be akin to Google with its Nexus line and will allow Microsoft to set an example of what to do as far as specs and the overall user experience are concerned.

The company is said to be exploring new form factors and ways to interact with devices “that have increasingly natural ways to use them including touch, gestures and speech.” Microsoft continues to be focused on a singular platform that will rule all screens from PCs, tablets, phones, TVs, and more according to a report on The Verge.

More recently, Microsoft has been rumored to enter the phone space and release its own Surface-branded Windows Phone 8 hardware. The company had banked on Nokia to increase market share for the platform, but things may not have been quite as good behind the scenes; when Windows Phone 8 debuted, Microsoft chose the HTC-made HTC 8X as the flagship device for the platform and Nokia was left stunned.