With Microsoft announcing their developer summit for the Windows Phone platform on June 20 and 21 in San Francisco, California, it appears that three popular mobile operating systems will be hosting their developer conferences in the summer period. Apple’s WWDC and Google’s  I/O conferences are both scheduled to take place at around the same time period.

Hopefully, either the closely timed launch dates for these developer conference will allow developers to attend multiple conferences so that they can create and port apps between different mobile platforms, rather than create more fierce competition for developers who must budget costs and time more efficiently and decide on which conference takes precedent. 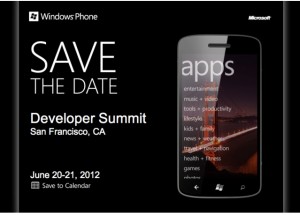 The Verge is reporting that Microsoft has begun sending out save the date invitations to developers of the Developer Summit. Additional details are not yet available at this time on the topics of the conference.

In the past, Microsoft had targeted developers with their branded MIX conference earlier in the year, around the March timeframe. The summer developer summit would take place a bit later than in previous years with the MIX conference.

At this time, Microsoft had not revealed if it would be announcing new devices or announcing the next-generation version of Windows Phone, known as Windows Phone 8, at the conference. Historically, Microsoft likes to announce its mobile OS refresh in late summer or early fall.

Perhaps, though, the proximity in timing of the Windows Phone developer summit to Google’s I/O is more than coincidental as Microsoft could look towards its rival’s conference to poach capable developers into creating more compelling app titles for the Windows Phone platform. Though Microsoft has a number of quality apps for its platform, its Marketplace still trails Apple’s App Store for iOS and Google Play for apps on Android.