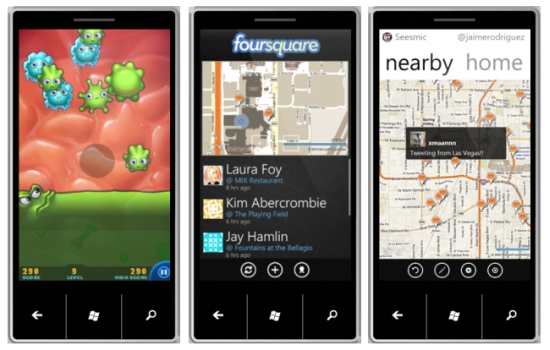 We may still be some time from Microsoft and partners bringing Windows Phone 7 Series bringing phones to market, but that doesn’t stop the news from coming out about the new platform.

Microsoft is revealing some of its app launch partners and for the most part the names are pretty familiar. Here are some of the most familiar ones: Pandora, Fandango, Foursquare, the Associated Press, Seesmic, Shazam, EA Mobile and Sling will have apps supposedly ready to go when the phones become available. Netfllix will also have an app available and you’ll be able to stream your Netflix movies over the phone via Sliverlight. What’s nice is that you’ll be able to try out the apps before you buy.

Developers will also be able to get their hands on development tools for free, but of course you still have to buy into the program for the $99 fee.

Other news is that Apps for the Windows Phone 7 Series will have to be purchased via the Windows Phone Marketplace. Microsoft is making assurances that it won’t fall prey to Apple App Store application submission woes, but we’ll have to see on that.