Tourists and those who live near London, England can check out the tablet for themselves in Trafalgar Square. According to The Verge, the entire Surface tablet itself has a display that measures 383-inches or around 31-feet. Microsoft isn’t using a Surface-like frame around a static billboard. Instead, the company has configured the giant Surface 2’s display to act as an external monitor to a regular-sized Surface 2 that’s actually doing all the heavy lifting backstage.

The giant Touch 2 Keyboard is also functional. Microsoft is letting users browse Twitter and walk around on the keys to control what happens on the giant Surface 2’s display. It has also teamed up with British rapper Dizzee Rascal to deliver a few verses to the crowd. 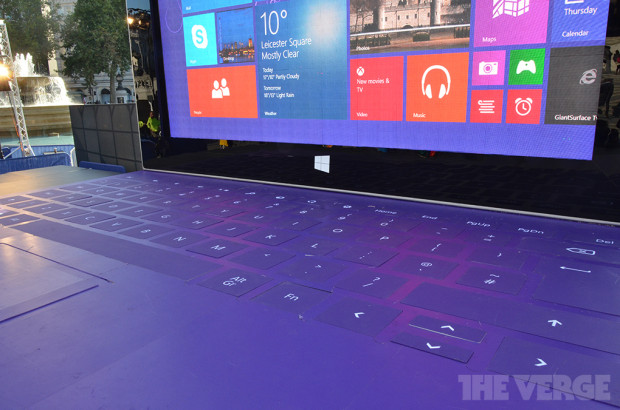 The giant Surface 2, erected in Greater London. Captured by The Verge.

The stunt is very similar to the giant Windows Phone device Microsoft built-in the middle of New York City to celebrate the launch of Windows Phone 7.5. That phone also featured a giant screen, and Microsoft teamed up with a few musical acts to grab the attention of the crowd during the time the phone was there.

Regardless of whether the stunt works, that Microsoft is able to pull it off on a single Surface 2 tablet bodes well for the NVIDIA Tegra 4 processor inside the Surface 2. The tablet went on sale this past Tuesday, and it includes a few internal upgrades that will please owners of its Surface RT predecessor. The Surface 2 also features a high-definition 10.6-inch display and a USB 3.0 port.

Users can pick up the Surface 2 from Best Buy, Staples and the Microsoft Store now. Pricing begins at $449 for a Surface 2 with 32GB of storage. Unfortunately, the Touch Cover 2 isn’t included with the Surface 2. Users will need to buy it separately for an extra $119.