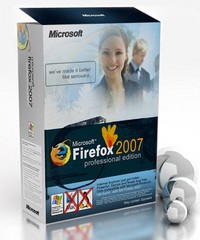 Parody alert. Parody alert. This will shake up a few folks if they just catch it in a feedreader. Very funny parody of what the marketing of Microsoft Firefox 2007 would look like. I like this one:

Stay Secure on the Web

Check out more of the fun here.

UPDATE: Even funnier, the picture is not displaying correctly in IE7 but does in Firefox. Go figure.