After many years of trying to brand its Live Internet services, Microsoft has finally confirmed that its Live Messenger chat service is on the way out to make room for Skype, which the company had acquired a year ago and was the focal point of the Windows Phone 8 launch event. With new focus on Skype to deliver VoIP telephony, chat and messenger service, as well as video delivery, it will give Microsoft a platform to challenge Apple’s FaceTime for iOS and OS X, RIM’s Blackberry Messenger service, and Google’s Google Voice and Hangout service for voice, chat, telephony, and video.

Given that FaceTime is currently limited to Apple’s desktop and mobile platforms, BlackBerry Messenger limited to BlackBerry smartphones and tablets, and Google’s cross-platform Hangout that works on Android, iOS, Windows, and Mac, Skype’s multi-platform service may help Windows Phone 8 and Windows users communicate with those not using Microsoft’s platform.

The move away from the Live brand is unsurprising given that Microsoft had been working on Bing for search and recently rolled out Outlook.com for email addresses. 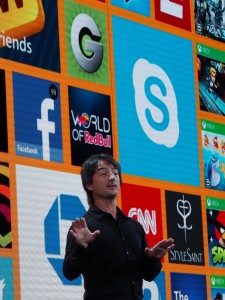 Official news of the change was confirmed by All Things D, after much speculation about the future of Live Messenger earlier this week.

Microsoft had been allowing Live users to log in with either their Live ID or their Facebook ID if they didn’t already have a Skype ID and the company has plans to integrate Live and Skype IDs moving forward to allow for a smooth transition to a Skype environment.

In terms of Windows Phone 8, Microsoft had revealed that Skype would be a focal point for the platform as it uses new APIs and codes that would allow Skype to not have to run in the background and can instantly wake up Windows Phones if a call comes in. With the new push capabilities, Skype is said to be the most efficient chat, video, and telephony solution according to Microsoft.