With their big Surface tablet reveal, Microsoft has taken a sharp turn in their Windows strategy, putting the company in direct competition with their hardware partners. Here’s why it had to happen and how it might help not hurt relations.

[Click here to watch the video of the new Surface announcement]

Not another Windows Vista

With Windows Vista, Microsoft introduced innovative features to take advantage of new hardware. Among them were ReadyDrive to optimize use of SSD/HDD hybrid drives and Sideshow to allow quick access to widget-style data. Microsoft, it seemed, was actively pushing the industry forward to new hardware designs.

Unfortunately, hardware vendors never really adopted those new technologies and Vista proved a poor fit for many existing PCs in part because it was intended for newer hardware. Vista became shunned as a failure and its hardware innovations forgotten.

Already people are predicting Windows 8/RT will be another Vista. It too relies on new hardware and design, even more heavily than Vista did, and will be a poor fit for older, non-touch hardware. Without full hardware support to take advantage of all Windows 8/RT can do, it will sink. Pushing vendors to adopt the technology might not be enough. Thus, Microsoft is taking control and driving the industry directly by, for the first time, releasing their own Windows computer.

But that daring tactic is a double-edged sword. Now, Microsoft is in the admittedly awkward position of competing directly against their own hardware partners at a time when another OS is luring them away. While the new Surface is an obvious strike against the iPad, it could also drive Microsoft’s hardware partners deeper into the arms of Android. Microsoft’s march to new ground could cost them more of their old kingdom. Or they could use it as leverage to strengthen their reign. 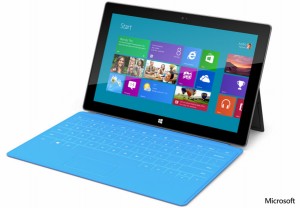 Microsoft makes its money not by selling stuff but by licensing their intellectual property. When you buy Microsoft Office, you’re buying a license to use that software. When vendors buy Windows to install on their hardware, they’re buying licenses to sell Windows PCs and devices. Now that vendors can license similar software elsewhere for free, Microsoft needs to sweeten the pot, so why not sweeten it with hardware designs?

Surface doesn’t need to be a sore spot between Microsoft and their hardware partners. It can be a selling point. The tablet market isn’t the PC world of ten years ago. Microsoft cannot expect vendors to pay whatever price Microsoft demands, not when Android is free and holds a solid second place in the tablet market. Windows needs premium features to justify its premium price. Hardware designs could be those features.

Best case scenario, their hardware partners run with it and make Windows tablets that are even better than Surface. Yeah, it makes Surface obsolete, but it would hurt the iPad even more and Microsoft would still make their money the billion-dollar way by selling Windows licenses, which is far better than watching vendors turn to Android. Worst case, vendors dump Windows and copy the Surface designs for their Android tablets, crushing Microsoft’s chances in the tablet market. Could go either way, but at least including the hardware designs with the Windows license gives vendors a reason to embrace what Microsoft has done with Surface and pay to license the technology rather than resent it and rip it off anyway.

By adopting this plan, Microsoft could win it all with Surface, facing the iPad directly and pushing back against Android’s encroachment in their territory. Two birds, one smooth polished stone. All they have to do is stay true to the licensing strategy that made Microsoft a Titan.