Microsoft has released two new versions of its popular remote desktop application including one for the iPhone and iPad and another for devices running Google’s Android operating system.

Like other remote desktop applications, Microsoft’s free Remote Desktop for Android and iOS apps allow users to connect to a laptop, desktop or tablet running its Windows operating system. The implications of releasing this type of application for free to users is huge since it allows users to connect to personal and work machines. However, Microsoft is positioning the Remote Desktop apps as the only solutions professionals need to work from anywhere.

Those using the applications won’t need to relearn how to use Windows. Microsoft says that the application supports all the touch and swipe gestures that a touchscreen Windows device does if someone is setting in front of it. Each app also supports all the connection tools that business and enterprise technology managers need including Remote Desktop Gateway and Network Layer Authentication to keep internal networks from being compromised. 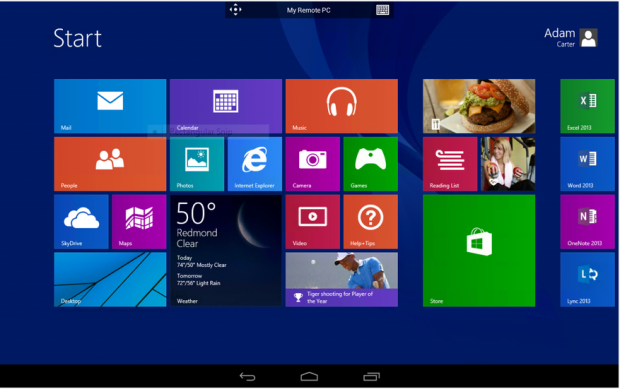 Remote Desktop for Android allows users to connect to their work or home PCs running Windows.

Users can manage these remote connections through the connection center utility. Microsoft also says that users can pair the Remote Desktop Apps with a monitor or projector during presentations too.

As for home users, the application allows users to get access to their computers as long as they have remote desktop setup on their PC and an internet connection. The company also says that it has worked to compress the amount of data the application users so that those connecting to computers on the go won’t suddenly blow a user’s monthly data allowance.