Microsoft To Deliver YouTube App in time for Xbox One Release

The Xbox One, Microsoft’s next-generation entertainment system, will launch with a native YouTube experience after all.

Microsoft shared the surprise news in a blog post on Xbox Wire this afternoon. Noting that the unannounced application would be in the Xbox Store in time for users to download it on launch day. Unfortunately, it seems that a native YouTube application being ready in time for release may have been news to Microsoft itself.

Although users will be able to browse for YouTube content and watch videos in their subscription queue, YouTube on Xbox One will not have support for a key Xbox One feature. According today’s blog post, users won’t actually be able to snap the application to the right side of their screen and do other things. This means users still won’t be able to watch a tutorial of a game level in YouTube while playing that same level themselves. 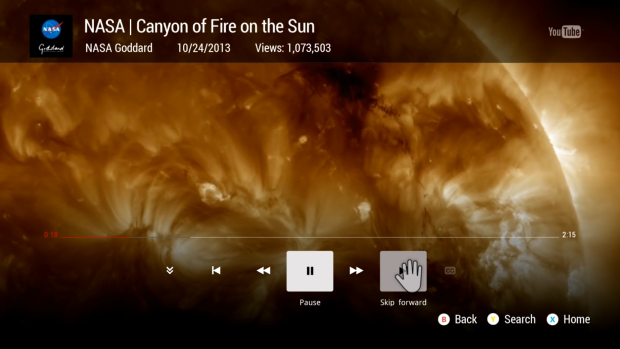 Despite that setback, the application seems sounds almost feature complete. YouTube on Xbox One will allow users to navigate the entire experience using the Kinect 2 sensor. They’ll also be able to control the application using hand gestures.

For the record, Microsoft says that it will work to add Snap mode to the Xbox One over time and that users should expect the feature to arrive “in the coming months.” Initially, the application won’t make it to Austria, Ireland and New Zealand, however Microsoft is confident that it can deliver the app to those countries in “the coming days.”

Today’s surprise reversal comes just two weeks after Microsoft announced that the Xbox One would have apps for Hulu Plus, Netflix, Verizon Fios TV, VUDU, The NFL, Amazon Instant Video, Crackle, CW TV, Fox, FX, MUZU, Twitch, Univision, TED, Machinima and Target Ticket. At that time, many considered the absence of YouTube as a bad omen for Microsoft’s relationship with Google. The two companies have fought over bringing YouTube to Windows Phone for months.

For the record, YouTube isn’t among the slate of applications users can expect when picking up Sony’s PlayStation 4.

The Xbox One launches this Friday for $499.