Starting today, iPhone and iPad users will be able to get many of the same features of Outlook in the form of in a new application available from the iTunes Store.

Using what Microsoft has dubbed OWA for iPad and OWA for iPhone, users will be able to access Office 365 accounts from their devices. In addition to giving users access to their email without being online, the application also seems to act as another Trojan horse for Microsoft’s Metro-design language and Office 365.

The application’s Mail, Calendar and People areas sit behind a sort of Start Screen that features Live Tiles that quickly update the user on their latest email, and documents. In fact, the entire experience isn’t too far-flung from the designs of Office 365 for iPhone, Office 365 for iPad as well as Outlook.com and Windows 8.1. 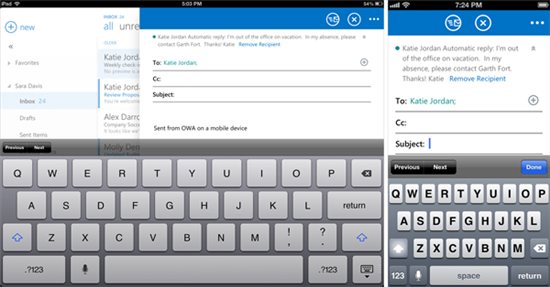 OWA for iPhone and OWA for iPad

As for Office 365 influences, only Office 365 users will be able to sign into the applications. Businesses who use local Exchange servers and other in-house Microsoft solutions are completely out of luck with these applications. It seems the only real advantages of the applications include being able to get access to those emails from anywhere on something other than Microsoft’s platforms, remote wipe for businesses and automatic push notifications.

Microsoft has also integrated voice dictation and Bing Maps into OWA for iPad and OWA for iPhone.

Currently Microsoft charges users $9.99 a month or $99.99 per year for access to Office 365. That subscription grants users access to 5 PC and Mac installs of Word, Excel, PowerPoint, Outlook, Publisher and Access. Users can also load mobile versions of the applications on up to five mobile devices. This excludes Microsoft’s Surface and devices running Windows Phone – both of which come with versions of Office built-in.

Read: Office for iPhone and iPad now in the App Store, With a Catch

Though it now offers a range of Office 365 solutions for iPhone and iPad, Microsoft has yet to offer the applications in any way to Android users beyond the SkyDrive service. SkyDrive is only available to users through web browsers.