Microsoft must think it has a good thing going with its Scroogled campaign, because the hits just keep coming. I’m not talking hits in the since of a “hit show.” I’m talking hits in the context of all out smack you across the mouth. The latest ad features the guys from the popular cable show Pawn Stars. In the ad, Pawn Star Rick Harrison is visited by a young lady who comes into his shop hoping to trade a Chromebook in for cash to get to Hollywood. 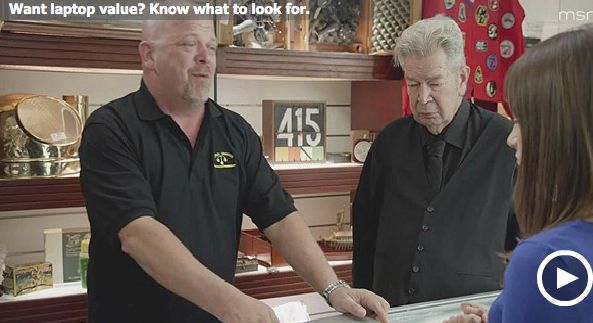 Harrison tells the young lady that a Chromebook needs a connection to be useful otherwise it is just a brick. Yeah, you read that right.

The Scroogled campaign is designed by Microsoft to scare users away from using Google products and preys on the idea that Google reads and uses your data to serve you ads. In case you didn’t know, that’s much like Microsoft or any other company that runs email does in order to run a SPAM filter. Recently Microsoft had released a line of t-shirts and mugs for the campaign.

Microsoft hired notorious political operative Mark Penn who has been an advisor to Hillary Clinton and he is the apparent brain behind this obvious attack strategy. The campaign, if you like this kind of dirty trick campaigning, as always been clever using anonymous couples to deliver the message, but now that celebrities are getting pulled into the mix it looks like Microsoft and Penn are raising the temperature a bit.

Intriguingly, the punchline delivered by the elder Harrison,”it might get you to Reno” sort of undercuts the ad’s message. If you’ve ever taken a laptop of any kind into a pawn shop, you won’t see much cash for one. A bus ticket from Las Vegas to Reno is about $8o one way. Maybe I’ve been in the wrong pawn shops but that’s about a typical pawn price for a laptop.