A mere 10 years after introducing the Tablet PC (and one month after the iPad outsold it), Microsoft is actively promoting the form factor with a series of web videos featuring the ASUS Eee Slate EP121. The shorts present four usage scenarios intended to appeal to a broad, non-geek audience, but leave out key details in building those illusions.

Sizing up the promo videos 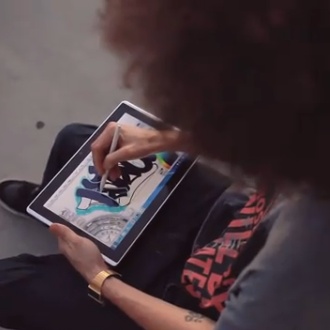 While the videos are well-presented, they do leave me with mixed feelings. Of the tablets currently available, the EP121 is probably the slate I’m most eager to get my hands on (if I was really eager to use an iPad, I’d have one). However, I am not part of the audience being targeted. I’m an experienced Tablet PC geek who uses a custom UI. They’re targeting “normals” who, as the mom explained, are not computer savvy. I eagerly recommend Tablet PCs to geeks and folks who are already familiar with the capabilities and deficiencies of Windows tablets, but outside that group, I’ve had to be far more selective.

For this group, the only one who seems to benefit from a Tablet PC is Rabi the graffiti artist. Rabi actually shows us how he uses true pen input with pressure sensitivity, something the iPad does not provide. The other three, however, do not demonstrate any usage that couldn’t be done on a lesser tablet, possibly with better results.

That could be the reason we don’t see much actual tablet usage in the videos. Most of the footage centers on the users, and when the slate is shown, you don’t really see it doing much. For example, the restaurateur launches Excel on the slate and then shows us how pinch to zoom works on it. Okay, good to know that works on the touchscreen, but most people don’t use Excel for the zoom functionality. The exception again is the graffiti artist Rabi.

For me, the worst part of the videos is that any effectiveness they have will ultimately be neutered by the price tag and battery life on the EP121. Its $999 starting price is double the starting price of the iPad, while its battery life is a mere 3 hours, which translates to about 2 hours of reliable use. That’s fine if you use the slate as a desktop replacement or alternative, or primarily use it in a home or office environment with access to a power outlet. But those are going to be brick walls to potential iPad buyers with lower price tags and longer battery life in mind.

More videos on the promo page

In addition to these videos, Microsoft has a promo page up on their website with two additional videos that actually makes sense for what the EP121 can and can’t do. They feature a dad using the slate as a desktop and then handing it off to his kids for drawing with the pen. The EP121 features an Intel Core i5 processor, 4GB of memory and up to 64GB SSD, making it more than capable as a PC. It also has a tough Gorilla Glass screen, which means it can withstand the abuse a kid might throw at it for 2-3 hours while running on battery. These videos, which are embedded on the site in Silverlight, better represent what the EP121 can offer than what they have on YouTube. I would have liked to see these in wide distribution.

Also on the page, they have an overview of two columns, one explaining how “It’s very PC” and the other explaining how “It’s not very PC”. Most of it is pretty clear cut, like listing Microsoft Outlook and Photoshop on the PC side and Amazon Kindle on the not so PC side. However, they list the Bluetooth keyboard on the not very PC side, while showing the keyboard on the PC side. They also have a short slideshow of key features and 360 view of the slate.

Drawbacks aside, it is good to finally see Microsoft making an effort on this front. Would have been nice if they’d done it earlier like many of us had wanted, generating awareness of the form factor in the years before Apple stole the product category. We can only hope they’ll one day have a more competitive product to promote.

Update: Another YouTube video entitled “Inspiration” was also posted. Features a blend of artistic and business usage. I like it a lot.