Microsoft, as expected, finally unveiled Office for iPad today. Actually there is no Microsoft Office for the iPad. There is Word for the iPad, Excel for the iPad, and Powerpoint for the iPad as three distinct Apps, unlike the existing Office Mobile versions for the iPhone and Android smartphones. Regardless of whether or not Microsoft is late to the party or not with the long overdue unveiling, it is obvious that a part of the strategy is to attract users to  Microsoft’s Cloud service, OneDrive, formerly known as Skydrive.  To that end, Microsoft is giving away free versions of OneDrive to some lucky iPad users beginning tomorrow, March 28, who happen to live close to a Microsoft Store. 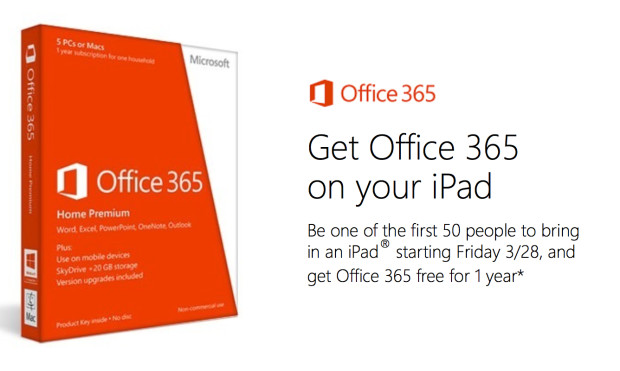 The give-a-way lasts only three days through March 30th and requires you to be one of the first 50 customers to show up with an iPad in tow to take advantage of the offer. You also have to participate in the “Put my iPad to Work” social campaign to qualify. That campaign requirement appears in the fine print, but I can find no info currently searching for “Put my iPad to Work.” None of the fine print makes it clear whether there will be 50 copies given away each day or just to the first 50 qualified users who come in beginning tomorrow, March 28th.

Also note that an Office 365 Personal Edition will be available this spring that will only cost $69 and that allows you to install Office 365 only on one computer and one tablet.

I’m opening a show Friday night and haven’t had much time to play with the new Apps after downloading them today. A quick first impression is that Microsoft has delivered nicely designed and featured versions of Word, Excel, and Powerpoint for the iPad that will delight those who are locked into using Office software. More as I get a chance to work with the new Apps.