Windows 8.1, the free update for Windows 8 users, isn’t available for all users to download to their PCs just yet, but that isn’t stopping the company from advertising a few of the operating system’s new features, including the return of the Start Button.

The new advertisement highlighting the return of the Start Button to the Windows 8.1 Desktop environment went up on Microsoft’s YouTube page this past weekend.

Dubbed “Windows 8.1 Everywhere,” the ad also places the spotlight on some of the other features that are unique to Microsoft’s approach to tablets and desktop PCs.

According to the advertisement users, “can do it all, simply and easily on a Windows tablet, PC or Surface.” As Windows 8 and Windows 8.1 include an application marketplace where users can purchase apps and use them on whatever Windows 8 or Windows 8.1 device they choose, Microsoft is hoping that its unified experience will help its operating system stand out from Apple’s iPad and tablets running Google’s Android. 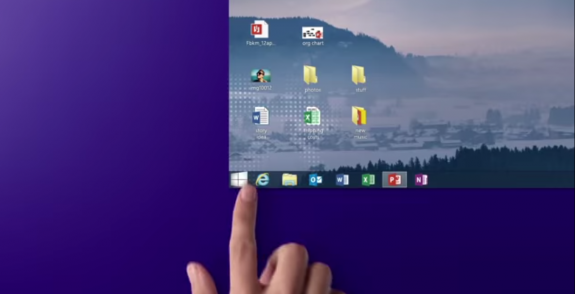 Other highlighted features include the new Start Screen customization options that allow users to resize Live Tiles to create a more personalized experience, and a brief look at the side-by-side multitasking that allows lets users browse and view multiple Windows Store applications. Depending on the user’s screen resolution, as many as eight applications can be open at the same time. It’s a feature that should help Microsoft as it works to bring many of the features from the Windows Desktop to its Metro environment.

Windows 8.1 will begin going out to users as a free update on October 18th. Other features that are new to Windows 8.1 include improved versions of each application built into Windows, built-in support for Microsoft’s SkyDrive cloud syncing service and universal search functionality powered by the company’s Bing search engine.

Users will get access to the update through the Windows Store on the day it becomes available.