Microsoft is heating up for something and playing leak to Twitter games. We’ve heard denials about a Zune phone from Redmond, but this little Twitter exchange seems to hint otherwise. Of course just like in politics, when someone denies something many times it means just the opposite. Who really knows, but I’m guessing June is going to be a fascinating month. (See UPDATE below)

Interesting that Microsoft is also setting up a movie trailer heralding the release of the Technical Preview of Office 2010 as well. You can check out the trailer here.

All of this is courtesy of Neowin via jkOnTheRun

UPDATE: Turns out it is someone else doing the playing around with Twitter. Apparently Microsoft has said there will be no Zune (HD, phone or otherwise) in June. And the Twitter account where all of this was a brewing is a fake one. The trailer is still a trailer though. The real Twitter account, if you want to follow it is @Office2010Movie. 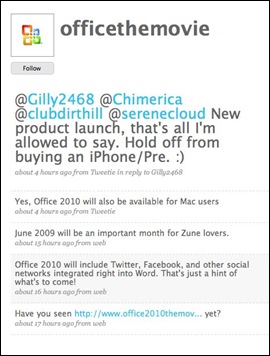