Despite customer confusion between the Windows RT and Windows 8 version of the operating system and accompanying hardware, lackluster sales, and heavy competition from Apple and Google’s Android, Microsoft may have finally found a sweet spot with its Surface RT tablets. Due to slow sales and what some would call underwhelming demand for its Surface RT tablet, which runs on a much lighter version of Windows for ARM processors resulting in incompatibilities with legacy programs designed for Windows 7 or earlier, Microsoft recently had slashed the $500 entry price of the slate to $350. A $150 price per unit cut had cost Microsoft nearly a $1 billion loss in its most recently reported financial quarter for the Surface business. 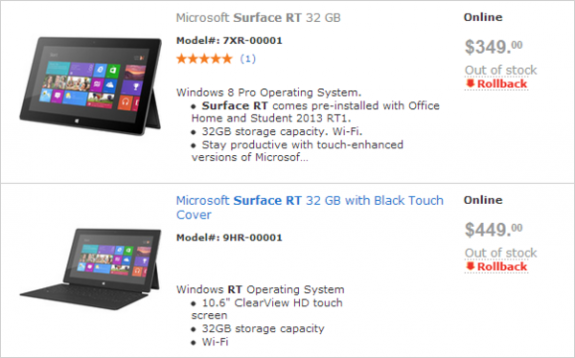 However, those price cuts may have worked. The 32 GB Surface RT at the new $349 price at Walmart was recently sold out. It’s unclear how much of a success Microsoft’s price drop is given that we don’t know how much inventory Walmart moved as a result. However, it’s a positive sign when there are still Surface sales.

According to ZDNet, it may not be just pricing alone. Now that the product has been on the market for some time, users who may not have known about the slate may now have had some hands-on time with them, either through local retailers or through the retail stores operated by Microsoft. This would allow the general consumers to gauge the value of the Surface, which does have a nice, solid feel in the hand and benefits from an exceptional build quality given this is Microsoft’s first tablet hardware.

Part of the problem with Surface is that this is Microsoft’s first time in the hardware space and it may not have enough experience with logistics and being able to secure critical components.

Directions on Microsoft analyst Michael Cherry noted, “I assumed that a lot of money went into: a) buying parts; b) buying time in a plant; and c) building sub-components such as milling the metal chassis that they were going on about so much.”

Hopefully, when it comes to building the next Surface, Microsoft would have learned from some of these mistakes.