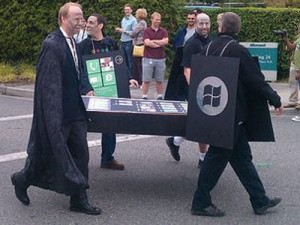 Well, at least they appear confident. Microsoft released its next great hope, Windows Phone 7 to manufacturing yesterday, and as a part of the celebrating staged a mock funeral. A mock funeral? Yep, the funeral cortege included hearses and pall bearers who were carrying coffins with an iPhone and a Blackberry in them, symbolically displaying Redmond’s hopes for the new mobile OS. They even had a group of mourners break out in dance to Michael Jackson’s Thriller.

I’m sure there was more than enough frustration built up inside of Microsoft from the knocks it has taken that this was a big release for many of the participants. Word is Windows Phone 7 gets released on October 11.