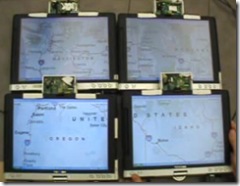 Sometimes people leave comments in our posts that really deserve some dedicated attention.

This morning, I posted up a video demonstrating auto-rotation on the OQO. Ken Hinckley, who works in Microsoft Research, noticed it and posted some really insightful thoughts, and links to video demos, on the use of accelerometers and auto-rotation, and how they have experimented with it over the years.

One interesting use of the accelerometer Microsoft came up with, is the ability to use the accelerometer to sense when two or more tablets were bumped up against each other. This enabled the displays to join together to make one big display. Fascinating stuff. Watch the videos below – they are hyperlinked.

This is very interesting. Thanks for posting the demo clip.

I think these kind of accelerometers can provide some very interesting capabilities for mobile devices and really the iPhone and these other devices have only just scratched the surface of what can be done.

We hacked up an  auto-rotation feature ( video ) like this back in the year 2000 or so on my poor old Cassiopeia Pocket PC. I ripped out the flash card port and stuffed the sensor hardware in there. Another one of the really useful features we used the accelerometer for was to automatically turn on the Pocket PC when you picked it up and looked at the screen. This is essentially a little “gesture” that the hardware can sense very reliably.

I also built a version of this hardware for my first Tablet PC a number of years ago and “AutoRotate” was one of the cooler demos. It was a little snappier than what you show in the video demo. Because of that, the potential problem with the screen not being in the desired orientation when you pick it up was really easy to fix – because flipping back only took about 2 seconds it wasn’t as much as a problem. We also had a little preview icon that would appear (the icon that would say “This way Up” with an arrow pointing to the new orientation) as feedback and early warning that the screen was about to flip. That made it a little more predictable and controllable. Unfortunatly I never shot a video of this, so now I’d have to resuscitate my old tablet to bring it back :-(

Another demo we had was an “Etch-a-Sketch” where you could tilt the tablet to draw straight lines – and to clear the screen, of course, you would flip the tablet over and shake it.

Or you could tilt the tablet to scroll through web pages. This requires an extra button, though, so that the tablet only scrolls when you hold down the button and tilt. Otherwise every time you move your tablet the page starts scrolling away and that is not so desirable :-)

Perhaps the most interesting thing we came up with for Tablet PC sized devices was the ability to use the accelerometers to sense when you bumped two tablets together ( video ). This was used as a way to make it really easy to join the displays of the tablets. So for example you could take a photo on your screen and make it expand to fill your buddy’s screen as well just by docking your tablets together.

One of these days we’ll have to take the time to port our old demos, which used our custom hardware, to hack into the built-in accelerometers that are on so many devices now. It’s good to see some interesting uses for these being built up by the community and I only hope that even more and cooler things will come out as people learn how to hack up demos that use the sensors to do neat stuff.