Unwired View has uncovered a patent from Microsoft describing a modular phone design where a keyboard, gamepad, extended battery or other accessory could be swapped in to alter a phone’s capabilities. 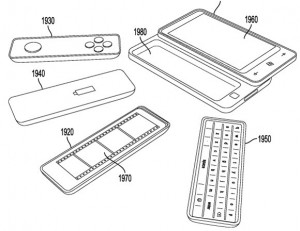 The slider design features an open area where the keyboard would traditionally be found. That area can be filled with a module that provides a second display, additional battery, game control, or a standard keyboard. Furthermore, except for the battery module, these modules would be able to function without being plugged in, potentially providing control of a smartphone while it is docked at a TV or monitor.

Modular phone designs are not new, and accessory makers already use the dock connection on the iPhone to expand its capabilities. However, this patent is unique in that Microsoft does not build their own phone hardware. That could change, but for now, I imagine these and other hardware designs could be licensed out along with the Windows Phone OS to device makers, adding value to the software license.