In a bid to compete against consumer tablets that offer all-day mobility thanks to low-power consumption while at the same time delivering the full performance of Windows, Microsoft is looking to patent a hybrid system where the tablet, which will also serve as a display, can be used on its own with low-powered system requirements or be docked into a keyboard dock or desktop base that has its own processor to handle the heavy lifting and serve as a full system when plugged in and docked. Microsoft’s patent is not new or novel in the mobile computing space, and we’ve seen the concept showcased and commercialized by various hardware manufacturers in the past. 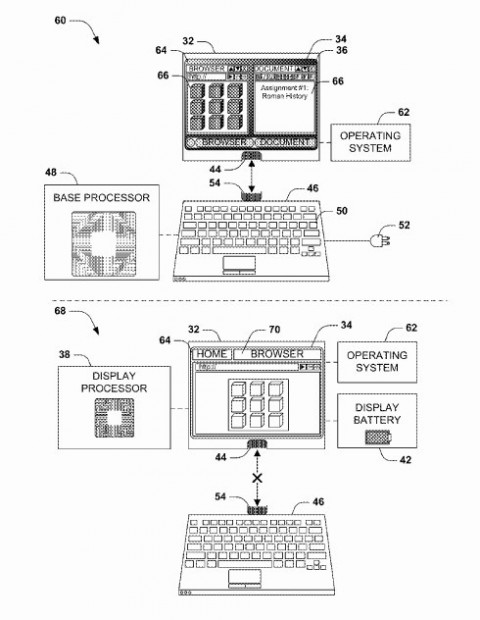 At the weakest level of this concept that Microsoft is trying to patent is the Asus Transformer series of tablets, which has the tablet–that can serve as a screen–that can be docked with a keyboard dock. Unfortunately, on Asus’s models, the keyboard dock only expands the functionality of the docked system by adding a large battery, additional ports, a keyboard, and trackpad in a package that rivals a slim netbook. The dock does not provide for a better processor and all the heavy work is still powered from the tablet, including storage, memory, RAM, and processing speed.

Lenovo’s U1 Hybrid system, which was showcased several years ago at the Consumer Electronics Show, is perhaps the closest physical embodiment to Microsoft’s vision. At its core, you have the tablet, which comes with a low-powered ARM Snapdragon processor from Qualcomm. The tablet itself can run a lightweight OS–in this case Android with Lenovo’s skin and UI on top. When docked into the keyboard dock to transform the slate into a laptop, the tablet itself serves as a display. The keyboard and the base of the laptop has its own memory, RAM, Intel Core i5 processor, and other components to make it a full-featured Windows machine running Windows 7. This way, on the go, users can have the flexibility of an Android tablet with maximum mobility and low power requirements. When additional horsepower is needed, users can dock the tablet, which turns the tablet into a laptop’s screen, and use it with the full power of Windows and Intel.

Microsoft’s concept extends this idea into desktops as well, as you can see from the patent drawings below. 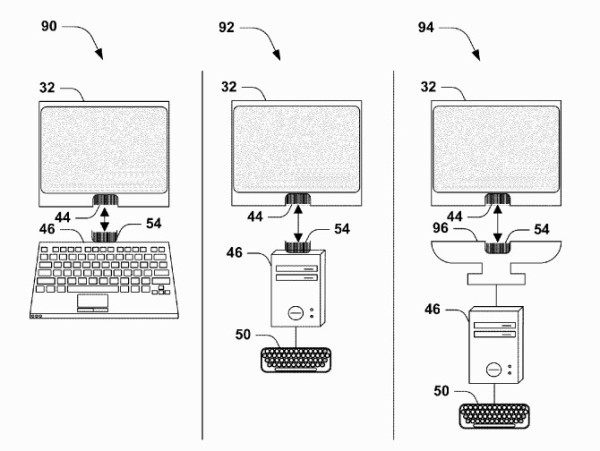 The idea makes sense as Windows 8 will support both ARM and x86 architectures. Lenovo, for example, could commercialize its U1 Hybrid system with just one OS–Windows. On the tablet side, it would use Windows 8 for ARM architecture and when docked, it would have more functionality and support legacy desktop apps under Windows 8 for Intel. This would allow Microsoft to really create an extensible OS that will be consumer- and business-ready in one package that would not require users to add a third or fourth screen into their lives. In this manner, users can carry their smartphones and laptop–which can convert into a Windows ARM tablet–while on the go.