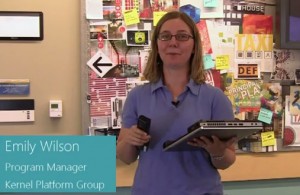 Microsoft is promising faster boot times for Windows 8. Engineers have designed what they are calling a hybrid boot method that allows for this increase in speed. I would encourage you to read this MSDN post about what that’s all about and some of the challenges the team faced or faces in trying to solve this age old problem. And certainly the video below makes things look pretty snappy.

But here’s the larger issue that these kind of pre-real world promos ignore. Historically Windows itself has been a part of the slow boot up issue, but only a part. It’s the software we choose to run on Windows that bogs the system down over time. (Can you say anti-malware?) Yeah, that’s a fact of life but it is one that promising a faster boot up time as a feature needs to address down the road. Show us a fully loaded system booting up and we’ll probably pay more attention. I don’t think we’ll ever see that video.

Perhaps Microsoft is re-working enough with the kernal and the OS so that other software developers can’t muck the works up as much. Perhaps Microsoft will somehow prevent OEMs from installing anti-malware software or other services that slow down most out of the box and later experiences. These are some of the real issues that bring out the cynics when we hear these kind of promises. I’m not sure they are really addressable, because once a new computer with a new OS is out of Microsoft’s hands, who knows what users will do with the system. That said, I’d love to see this addressed somehow.