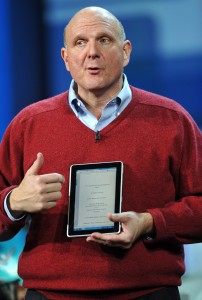 Microsoft is getting ready to show off a new tablet user interface design that will be bundled together with its next-generation Windows 8 desktop operating system. Unlike rival tablet operating systems, Windows 8 tablets will run a desktop-class OS and not a scaled down mobile OS. According to Business Insider, the Redmond, Washington software company may be ready to show off the new tablet UI in June, at the end of the company’s fiscal year.

In the past, Microsoft has said that Windows Phone 7, its mobile OS, will not make it past smartphones and it will reserve Windows for tablets. Like Apple, it looks like Microsoft is beginning to borrow some features from mobile for its desktop OS for use in its tablets.

In a previous report, Mary Jo Foley of ZDNet reported that Microsoft may achieve its third milestone for Windows 8 development at the end of July. If Microsoft follows its timeline for release with Windows 7, Windows 8’s third milestone would be the last internal milestone and a public preview of the OS could be ready in time for the Professional Developers Conference in Fall. The OS would be released a year later, which means that like its late debuting smartphone platform, Microsoft’s tablet platform will have to catch up to rival OSes.

While Microsoft had ignited the tablet revolution about a decade ago, the Tablet PCs never gained mainstream adoption outside of enterprise and vertical markets. Early tablet computers were powerful, but they consumed a lot of power and that resulted in short battery life. Also, while the slate form factor didn’t do as well, the convertible form factor offered the versatility of a slate or laptop with a rotating screen. That design, however, led to heavier, bulky tablets when used in slate mode. Still, Microsoft’s tablet environment offers one of the best inking capabilities on the market.