Though a full version of Microsoft Office still has not hit Apple’s iOS platform yet, Microsoft has released OneNote for the consumer tablet. The iOS version of OneNote is now compatible with Apple’s iPad and can take advantage of the larger screen real estate afforded on the tablet. The tablet version comes with a new tablet-centric UI and the iOS OneNote app for the iPhone has been updated with performance improvements, easier navigation, and table viewing. 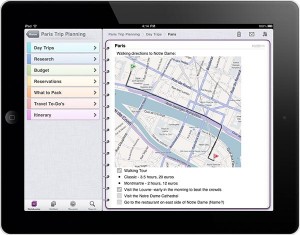 OneNote is a free app for both devices for up to 500 notes. Once the quota has been reached, users could pay $4.99 to continue use on the iPhone or $14.99 to use on the iPad.

Users can also store their notebooks on a free Microsoft SkyDrive account for cloud-based storage. This way, notes can be readily accessible from any Internet-connected device without having to synchronize or transfer notes. Additionally, users can give access to notebooks to family and friends for further online collaboration.

Additionally, Microsoft has announced that Microsoft Lync, part of the company’s unified communications solution, to launch soon on iOS.