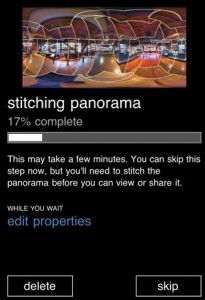 Microsoft’s Photosynth is a cool App/Service. It allows you to take a spherical, panoramic photo view of a room or a location and view it on the web. Up until today it has only been available on the web but now it is available for a certain mobile device platform. Don’t think that means WP7. Nope, it’s available on the iOS platform. Some may say this is a right hand not knowing what they left hand is doing, but I’d say it is probably just addressing the fact that iOS has been around a bit longer.

In any regard, the App works mostly has advertised. You stand in a location and rotate, moving your camera around, and up and down. You can get a 360 look at what’s around you. You can then share that look on Bing Maps, or Facebook, or embed it or send a link. There are certainly other iOS Apps that have similar functionality, but Photosynth gives you that spherical range for your shots, so that’s the differentiator. It works OK, it occasionally doesn’t follow along and asks you to back track or hit the screen to continue, but for what it is, it’s kinda neat.

Here’s an example of one that I took of my neighborhood. As you can see there are some issues with the final result. That’s my friend Malia in the picture who arrived while I was taking the shot. She’s not an issue. You’ll need to have Silverlight installed to view the synth.