Microsoft could be working on branded smart watches with touch screens to take on the rumored iWatch.

According to sources who talked to The Wall Street Journal, earlier this year Microsoft began collaborating with Asian suppliers on components that it would use to create its own branded smart watches. Though the executives from the aforementioned Asian component suppliers spoke to the Journal on the condition of anonymity, the report cites one source as having “met with Microsoft’s research and development team”. 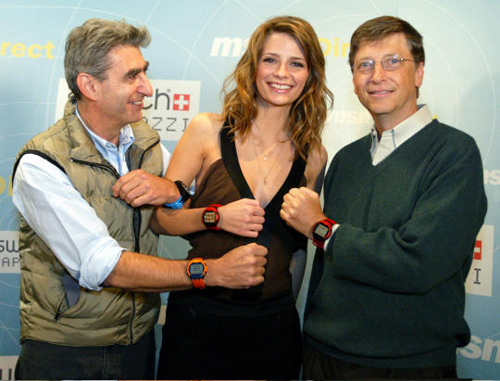 As of yet, Microsoft has declined to comment on the rumors.

If rumors of a Microsoft branded smart watch are true, the company would be the latest in large tech companies to making an attempt to move into “wearable computing”. Wearable computing are gadgets that have been designed to perform a function while making itself quickly accessible to the user.

Though few wearable computing devices outside of Nike’s FuelBand products have sold well, some believe that category does have room for growth. So far, the category has remained the playground of lifestyle brands looking to help users stay in shape however, as is the case with the Pebble smart watch, users are beginning to crave more and more features.

Whereas Fuelband focuses on keeping the user healthy through a built in sensor, the Pebble smart watch is all about letting users access features of their smartphone without actually having to take it out of their pocket. These features include reading text messages on the watch’s face instead of users removing their smartphones from their pocket and controlling music playback. GottaBeMobile found the Pebble Smart Watch to too limited in its usage cases to be worth the $150 price tag, though that could be fixed with more application support on Android and iOS.

Apple also has plans in the wearable computing space. Apple board member Bill Campbell’s recent comments on the potential intimate relationship a user could have with a smart watch –or smart glasses in the case of Google, could be indicative of the leadership at Apple’s feelings toward the potential for an iWatch. According to rumors from the New York Times, Apple’s iWatch could even go so far as to replace a user’s smartphone.

“When you start to think about glasses or watches,” Campbell said. “They become as intimate as the cell phone was.”

One product whose existence has outright been confirmed is Google Glass. The Verge reports that the Google will ship an early Explorer Edition of Google Glass sometime this year. The outlet also reports that Google Glass devices will have Wi-Fi, and Bluetooth and ship for around $1,500. Google Glass would allow for turn-by-turn navigation, and video communication for wearers according to promotional materials released by the company. Recent rumors also point to a Google Glass like device also in development at Microsoft.

Microsoft has experimented with wearable computing devices before. Microsoft introduced SPOT or the Smart Personal Objects Technology initiative back in 2004. Those watches allowed for FM radio, and news services for a yearly fee of $59.99. Though the product itself was discontinued in 2008, Microsoft’s MSN division continued to support the service that powered the devices until 2011.