For many a Tablet PC and digital inking fan the week ahead promises to be an interesting one. On Tuesday, Microsoft is holding “a small event” where it is rumored that new CEO Satya Nadella is going to unveil a Surface mini tablet along with possibly another tablet as well. Some say that might be a Surface Pro 3. If any of that comes to be it will certainly be interesting news. But what has digital inking fans curious is that rumors about the Surface mini tablet have prominently mentioned that this small tablet will feature a stylus and digital inking prominently, perhaps tied in some way directly with OneNote.

Keep in mind we won’t know the real skinny until Microsoft makes an announcement on Tuesday. But there are some other reports that run parallel to this potential news that are worth taking a look at. 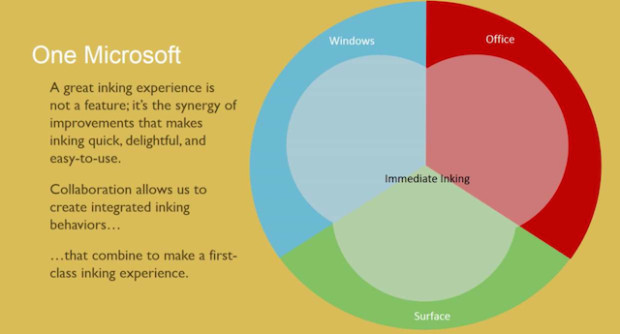 Noted Microsoft watcher Mary Jo Foley is reporting that Microsoft has the pen very much in mind and has a Cross-Group team made up of members from Office, Windows, Surface and Perceptive Pixel teams focusing on a unified digital inking strategy and technologies. The headline of Ms. Foley’s post blares Coming to a Microsoft Surface near you: Cross-platform inking. According to Foley the team has been in place since the fall of 2013.

Many Microsoft Tablet PC fans have long felt that Microsoft let its digital inking technology advances and advantages simply dry up like ink in a poorly maintained fountain pen as its focus turned to other things. Tablet PCs weren’t perfect by any means, but the digital inking aspect had great promise. After abysmally poor marketing efforts and lackluster sales success, Tablet PCs never gained much momentum after Microsoft’s initial push for the technology. There were certainly many reasons for that languishing. One of those was that Microsoft had a tough time selling a coordinated strategy even within its own organization and business units.

Perhaps that’s changing. Apparently after Microsoft’s recent company wide reorganization this Cross-Group team has formed and now devised a “One Microsoft Ink” Strategy. At that link you will find a video about what the the Cross-Group team is up to. You’ll also hear Microsoft Program Manager Tucker Hatfield mention that Microsoft is looking to incorporate this new thinking about digital ink into Windows Threshold, which is thought to be Windows 9. Windows 9 is expected to debut in Spring 2015. So, if any of this groups thinking plays a part in Tuesday’s announcement, expect it only to hint at what might be to come.

Foley also links to information from Paul Thurrott’s Windows SuperSite that might be on the roadmap for the “touch based” version of Office. Codenamed Office Gemini that version is expected when the leaves begin to fall this Autumn. The slides that Thurrott put up in that post are a part of the presentation included in the video presentation  and can be downloaded for your enjoyment here. 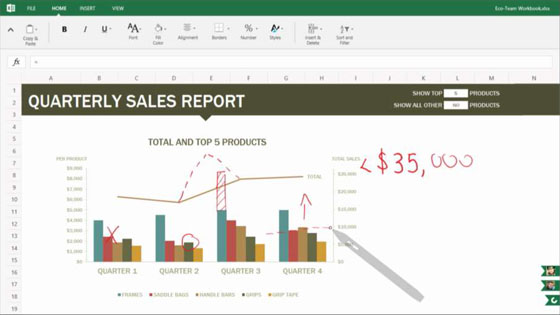 Thurrott’s caution that these slides may be out of date is echoed here. 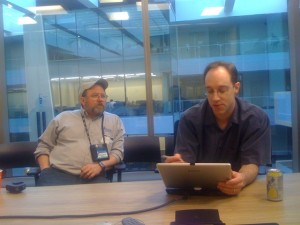 I’m sure long time Tablet PC fans will recognize a couple of names from the video presentation. Ken Hinckley begins with an introduction of the team of Tucker Hatfield and William Vong. Hinckley was well known to Tablet PC fans as the creator of InkSeine and a passionate advocate of digital inking. Here’s a link to some of the early GBM coverage of InkSeine and Hinckley. William Vong is a 20 year or so Microsoft veteran who started out with Windows CE and the Pocket PC and did quite a bit of work on the original Tablet PC.

If you take the time to watch the video, (it’s an hour and 24 minutes long) you’ll hear some interesting things from Hatfield and Vong that will make long time Tablet PC fans’ ears perk up a bit. You’ll also here Vong say that the future isn’t necessarily trying to build on what was there before, and that pen and ink should be treated as a capability and not just a feature. The central premise behind the presentation is one that many Tablet PC fans argued in favor of for quite some time in those heady days. Viewing the video is quite a trip down memory lane with Vong and Hatfield talking about digital inking and how it should be integrated into the platform and Apps, not just bolted on.

So, are we on the cusp of a digital inking resurgence? That’s tough to say. The capabilities (not features) will have to be quite something to overcome obstacles Microsoft created for itself and its Tablet PC legacy. The current Surface Pro and Surface Pro 2 already have digital inking capability, but what’s there hasn’t exactly taken the world by storm. For that matter, neither has the Surface tablet line of products. iOS developers have done a very capable job of creating some digital inking Apps for the iPad, even without the benefit of an active digitizer, and Samsung has captured some attention with its Galaxy Note lineup of stylus capable smartphones and tablets.

Can Microsoft create an ARM based smaller tablet with digital inking at its core and rekindle excitement about the Surface platform? Perhaps. But don’t think we’ll see more than a hint of what this Cross-Platform group is working towards with whatever is announced on Tuesday. Remember, we’re probably talking 2015 before any of this yields any tangible results. That said, Microsoft has certainly chosen interesting timing for whatever they are going to announce this week. Analysts are bemoaning a downslide in tablet sales. Samsung is rumored to be scaling back on its tablet production numbers, although it has a presentation scheduled for June at which new tablets are thought to be unveiled.