Microsoft Reveals the Ultimate Destiny Deal for Xbox One Buyers

With just a week left until Destiny arrives on store shelves many believed that release day would arrive without a single high-profile deal that doesn’t involve trading in older games. Microsoft has solved that particular problem for Xbox One buyers. This morning the company announced an epic bombshell of a Destiny deal. Users who purchase an Xbox One next will get Destiny – or any game they want – at absolutely no charge.

A post on the company’s Xbox Wire news blog contains all the details. From September 7th until September 13th, gamers will be able to purchase an Xbox One and get a game for their console at absolute no charge. Microsoft isn’t restricting the deal to just the base level $399 Xbox One either. The $499 Xbox One + Kinect bundle will also be eligible for the deal. 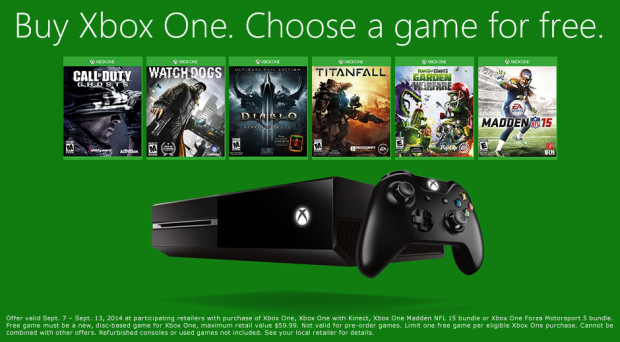 Judging from what the fine print included in the post about the Xbox One deal, Microsoft isn’t restricting users in anyway. Xbox One buyers looking to take advantage of the deal will be able to buy any game as long as it’s new and not a pre-played discounted copy like what GameStop offers. The game doesn’t have to cost $59.99 – buyers can get any game they want as long as it’s new. Microsoft is restricting the deal to one game though, so users can do something like buy one of last year’s hot titles and then spend the rest on another. That being said, smart Xbox One buyers will be able to game this by purchasing one of the Xbox One bundles the company revealed roughly a month ago. The Madden 15 Xbox One bundle and Forza 5 Xbox One bundles are also included in the deal. Presumably, the Titanfall Xbox One bundle would be too — if it were actually still available anywhere. When it arrives on store shelves next week, the basic version of Destiny will cost $59.99.

The free Xbox One game users get as part of this deal can’t be a digital download code either. Buyers taking advantage of this Xbox One deal can’t use the value to purchase games that haven’t been released yet. So for example, you can’t buy an Xbox One next week and expect to get a copy of Assassin’s Creed Unity or free later this year or anything.

Really, there’s only one trick here. Microsoft says only those who purchase their console at a “participating retailer” will be able to get an Xbox One game with their console at absolutely no charge. It doesn’t appear as if the company means only its retail locations, but that does mean users are stuck looking at sales ads and calling their local game retailers to find out if they are participating in the deal.

Base level Xbox One buyers are pretty much getting an experience that cost early adopters $499 plus the cost of a game, for just $339. Of course, the same isn’t true for users who want a Kinect sensor for giving voice commands, playing games without a controller and watching live television.

So why are we considering this a Destiny Deal and simply not a huge Xbox One price cut. The timing of this deal forces you to conclude that Microsoft wanted to rain on Sony’s Destiny release festivities. PS4 buyers will have the option to pick up a white console that includes the game. They’ll also get exclusive content with the game that Xbox One owners won’t be able to get their hands on until next year at the earliest. What Microsoft has done here is create its own Destiny Xbox One bundle and added insult to injury by letting all Xbox One buyers create bundles of their own if they don’t like Destiny.

In short, Microsoft has created its own Destiny Xbox One bundle for $399. For comparison, the Destiny PS4 bundle costs users $449.99.