Remember Microsoft’s Scroogled campaign? You know the one where Microsoft takes a few punches at Google for stealing your data with its products. Tough to forget because at the moment, Microsoft doesn’t want us to.

Well, if you’re Christmas shopping for your favorite Edward Snowden fan you might want to take a look at the Microsoft Store. Search for Scroogled. (Yeah, Microsoft will capture your data on the search.) And you’ll see a page of Scroogled branded products.

There are several Scroogled products available, but two of them are especially fun and catty. One, a coffee cup and the other a t-shirt, both of which contain the slogan you can see in the pictures below. The coffee cup sells for $7.99 and the t-shirt for $11.99. 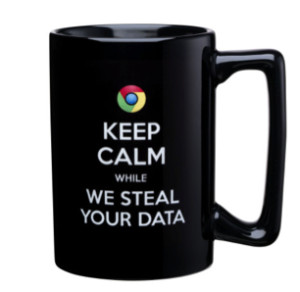 All in good fun? Probably yes, maybe no. Microsoft thinks it has a good thing going with the Scroogled campaign. Ironically it is one of the better ones Microsoft has ever run and this one ventures into attack ad land and isn’t promoting a product. But there’s some risk as well. Microsoft’s data tentacles may not 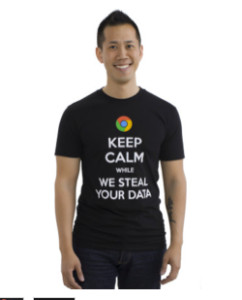 reach as deep into your data as Google’s does, but it still wants your data. In fact everyone does. It’s only a matter of time before before some data incident occurs that might backfire on Microsoft. What’s that old saying about dogs not doing their business where they eat?

But anyway, Microsoft is having fun. I’m guessing one or two Google employees will receive one of these products as a gag gift this holiday season.

And Mr. Snowden? If you’re reading this I need an address to send you the set I bought you. If either you or the NSA would kindly provide it, I would greatly appreciate it.