Microsoft will likely reveal its next-generation Surface devices at an event on September 23rd.

That’s the date stamped on invitations for a press event that were sent to some media outlets early today. While the invitation itself does indicate that Microsoft plans to share more about its plans for its internally developed Surface tablets, it doesn’t actually hint at what users could see from the announcement.

Instead, the invitation showcases a Surface tablet connected to a Surface Type Cover with the word “Surface” sitting in the top right hand corner. Allegedly the Surface Pro 2 and Surface 2 will look completely identical to the devices they are replacing in Microsoft’s tablet line-up. That includes the VaporMg, casing and other physical attributes. 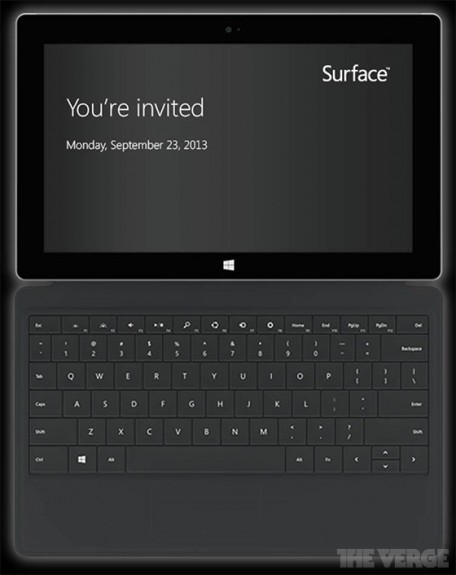 The Surface Event invitation sent to The Verge.

Internally, the devices would boast fixes for many of the things users complained about after the Surface RT and Surface Pro launched. For Surface 2 that means a faster NVIDIA Tegra processor and 4GB of RAM to address that devices performance, and the addition of USB 3.0 and Bluetooth 4.0 for connectivity. As for the Surface Pro 2, rumors are that Microsoft plans on addressing that device’s battery-life with Intel’s Haswell chipset. Statistically, machines that have switched to Haswell processors from Intel’s older designs see a battery life increase of as much as 40%.

Reports have also indicated that Microsoft will address each tablet’s shortcomings with a few new accessories designed to complement the line’s ability to transform into the computing device that users need at that particular moment. This will include the Power Cover, a Type Cover that has a built-in battery pack that can recharge the Surface Pro, Surface Pro 2 and the Surface 2. It’s also been said that Microsoft will début a desktop docking station for the Surface Pro tablets as well. With it, Surface users would finally be able to ditch many of the convoluted docking stations and chords that are required to use the device for everyday desktop computing.

Earlier this year, reports indicated that Microsoft was planning a smaller 8-inch Surface tablet to compete with the iPad mini and Nexus 7 this fall. However rumors of the device have since died out.

Whatever the company launches, it’ll need to use the opportunity to convey that it understands what made the Surface tablets such a hard sell to consumers last year: pricing. Unfortunately, there have been no rumors about pricing for any of the updated Surface tablets.