Users playing Forza 5 on Microsoft’s next-generation Xbox One console won’t have to settle for traditional controllers when the it debuts this November. They’ll also have the option to pick up the racing accessories Microsoft has teamed up with its partners to create.

In a video interview with the Xbox’s Director of Strategic Alliances, Branden Powell, Microsoft showcased a few of the innovations coming to the new racing accessories for the Xbox One.Both new wheel includes upgrades in force feedback. These upgrades allow developers to intelligently program vibration responses for things like breaking, turning and speed. Previously, the company only allowed developers to provide pre-made vibration responses for some in-game actions.

According to Powell, Microsoft has added new levels of “modularity” so that the console can detect when buttons of fightsticks and racing wheels have been reconfigured. All of this generation’s accessories are paired to each player using the Kinect sensor included with every Xbox One. This keeps users from having to physically pair each hardware accessory – like a steering wheel – to the corresponding controller. 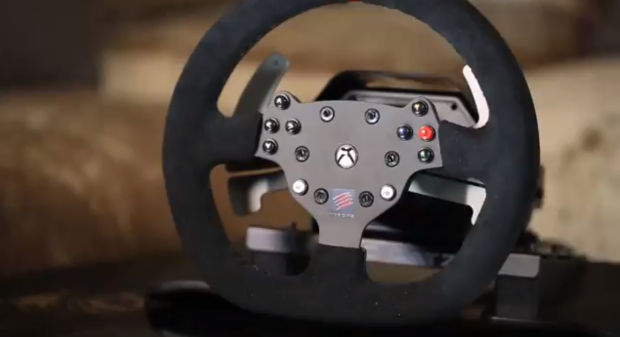 The Mad Catz Steering Wheel for Xbox One.

The Thrustmaster Italia includes all the necessary buttons and gauges that users would expect from a typical Thrustmaster steering wheel. That includes shifting gauges and foot pedals for users who would like to complete their simulation experience. It also features brush-less motors so that its vibrations are quieter than average wheels.

Users will have the option to buy the Mad Catz Wheel in different configurations that are customized for their needs. Users can actually swap the steering wheels for different types of racing games without ever having to buy a completely new device. The matching Mad Catz Pedal set is also adjustable, though it limits users to just adjusting pedal width, and spring capacity.

Powell didn’t mention specific pricing for either wheels, which is important since Xbox One users upgrading from the Xbox 360 will need to purchase a new wheel.

The company is also highlighting a new Polk Audio Forza soundbar that will allow users to get higher fidelity sound from Forza 5. According to the video, Polk worked with the Forza Audio Team to match all of the game’s sounds to specific speakers inside the soundbar. The soundbar has a series of lights indicating which direction sounds being fed to its speakers are coming from.

Microsoft is only confirming that users should begin seeing these new Xbox One accessories in store this fall. The Xbox One launches on November 22nd.