Microsoft’s Surface team has officially unveiled the limited $13,500 pricing for 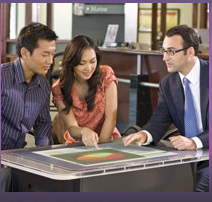 developers interested in taking Surface natural user interface development to the next level. This limited offer, which also includes 5 SDK licenses, will expire on November 15, so interested developers better act fast. In addition to this limited pricing, attendees at PDC2008 Surface sessions are being given licenses to Surface SDK and the Surface Simulator.

In an interview I had with the team on Friday, I was also told there are plans to launch a Surface marketplace where developers will be able to showcase their apps to interested parties. No timetable was given on when the marketplace / app store would launch, but this is a very good opportunity for some enterprising coders looking to get in on the ground floor of the next big thing.

Here is an interview the Surface team did with Vectorform, one of the leading Surface developing teams out there right now.