Microsoft Teams up with One Laptop per Child Initiative 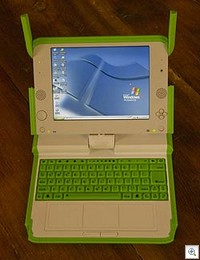 Microsoft and the One Laptop pe Child (OLPC) folks have announced that they are teaming up to put Windows XP on the OLPC devices, called the XO, that are targeted towards the world’s poorest children. Microsoft has spent a year working with partners to develop customized drivers so that XP can run on the XO. The goal is to have both XP and the Linux OS both installed on each machine so that the user has the choice.