Even before Apple’s suspected iPhone 6 event Microsoft is letting users know that they’ll have options besides whatever Apple mobile phone makes its début on September 9th. Microsoft recently started sending out invitations for a reveal of what could be the Lumia 830 at IFA 2014 in just a few weeks.

According to WP Central, Microsoft began sending out invites for a press event at the IFA 2014 trade show earlier this week. IFA 2014, is one of the world’s largest consumer technology trade shows. Typically, large companies use the invent to reveal their new smartphone and gadget line-ups ahead of the fall and the busy holiday shopping season. Microsoft’s IFA 2014 briefing will take place on September 4th in Berlin, Germany. 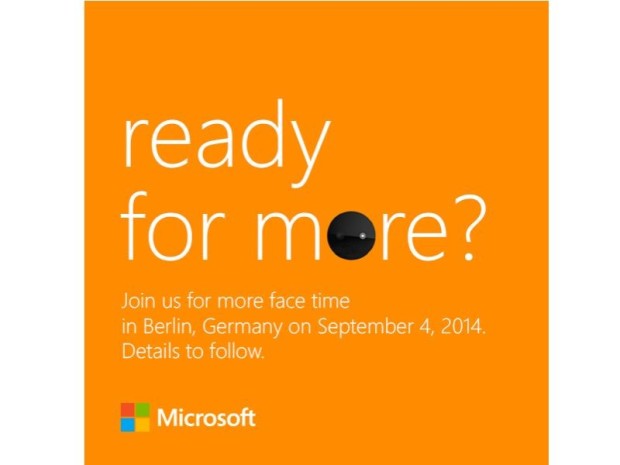 To its credit, Microsoft certainly isn’t being very coy about announcing an iPhone alternative at this IFA 2014 briefing. The invitation asks users if they’re “ready for more?” The more includes a stylized o that looks very similar to the rear-facing camera pod that’s a part of the Nokia Lumia 1020 smartphone that Nokia revealed last year. It also looks similar to leaked photos of a new device that could be on the way. 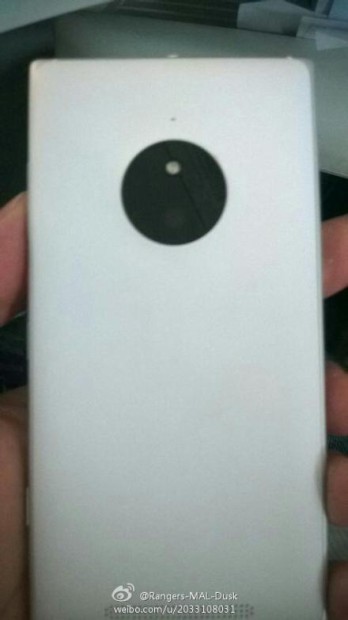 Leaked photos of the Lumia 830

Last month leaks revealed what most now believe to be the Lumia 830, an upcoming replacement for the mid-range Lumia 820 smartphone that was sold on AT&T. The device in the leaked picture from last month and the camera pod on the invitation look identical. The “More” part could also be a reference to the high-quality photos that a few of Nokia’s high-end smartphones have. Nokia — now Microsoft’s mobile devices unit — liked to show off just how great the Lumia 1020’s camera was by taking pictures and then revealing some small detail that users wouldn’t be able to see otherwise. With that tagline, it’s almost a guaranteed that the Lumia 830 will include some of the technology that makes the Lumia 1020 one of the best camera-centric smartphones ever released.

The leaked photos of the Lumia 830 also revealed a chassis with metal edges and a polycarbonate plastic rear. It’s the same design used on the Nokia Lumia 925 and the Nokia Lumia Icon. It’s perhaps not a coincidence that both of those phones also look pretty similar to iPhone 6 mockups and renders we’ve seen too.

It’s very important that Microsoft actually have some good hardware news to share at this IFA 2014 event. While it’s gotten better at competing with the iPhone and Google’s Android operating system on features alone, Windows Phone hardware is still lacking. In the United States there hasn’t been a new flagship Windows Phone to rival the iPhone on AT&T & T-Mobile since the spring and summer of last year. That’s when Nokia revealed the Lumia 1020 and the Lumia 925. Verizon has an iPhone 6 competitor in the Lumia Icon, but even it’s starting to show its age. The phone was first revealed and released earlier this year. By the time the rumored iPhone 6 arrives it will have been available for around six months. That’s an eternity in the mobile business.

Apple’s is rumored to be holding its iPhone 6 event on September 9th, five days after Microsoft reveals what it has in store for users this fall at its IFA 2014 press conference. Reports indicate that the iPhone 6 will have a larger screen and some upgraded internals. Earlier this year, Apple revealed that its iOS 8 operating system would include a huge amount of ways for developers to integrate their apps into the operating system. New widgets, actionable notifications and a dozens of APIs will make the operating system more developer, and therefore more user-friendly, version of iOS there has ever been. Being both easy to use and easy for developers to integrate has always been a focus for Windows Phone too.