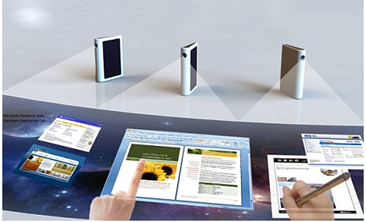 Mary Jo Foley is reporting that Microsoft is getting ready to show off a sort of mobile version of Microsoft Surface, that Microsoft is calling Mobile Surface. This is being shown at an employee-0nly Microsoft Research showcase, but some reporters have seen it in action.

The idea is to hook up a mobile phone with a camera and projector. The screen is projected onto a table top and a user can then use hand gestures to control it. Supposedly it not only recognizes gestures in a lateral manner, but also can detect the distance between your hand and the surface.

Todd Bishop managed to record a video of this in action and you can view that below.

For Microsoft Courier fans, Mary Jo also says Microsoft is still working on a variety of touch projects including Courier, but that we aren’t likely to see anything beyond the incubation phase until 2011.

Some more info on this at Gizmodo.