Microsoft has begun sending out invitations to an event taking place May 24th  in New York City where the company will introduce the ‘next major release of Windows Phone’, a release that will likely be the Mango update for Windows Phone 7 that Microsoft has already partially detailed and is planning to release later this year. 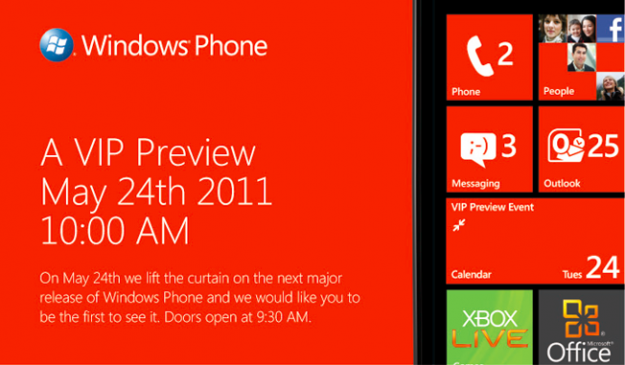 Mango, which will be the follow up to the recently rolled out NoDo aka copy and paste update, is set to bring a host of features and improvements to owners of Windows Phone  handsets. The company has already confirmed several of these while earlier today, a few more leaked to the surface.

In addition to the improved multitasking and an improved Internet Explorer 9 experience that Microsoft has already confirmed for the update, Mango will apparently also bring a suite of Bing-branded features including Bing Audio (a rival for SoundHound and Shazam), Bing Vision (bar code software) and turn-by turn navigation using Bing Maps.

There is also the possibility that Microsoft could reveal some new hardware, the event invitation doesn’t explicitly mention software, however, odds are, the event will revolve around the Mango update.

Back at MIX 11, Microsoft’s Joe Belfiore confirmed that the Mango update will roll out as an update to older devices some point during the fall of this year and will come pre-loaded on handsets that come out later in the year.