In a new advertisement, designed to showcase the relatively high cost of the Samsung Galaxy S4 in relationship to a Windows Phone, Microsoft contends that the users who choose to purchase a Nokia Lumia 521 instead can get a better deal.

The advertisement features Ben Rudolph, who previously hosted the company’s Smoked by Windows Phone efforts to showcase how much faster it is to do things in Windows Phone instead of Google’s Android. 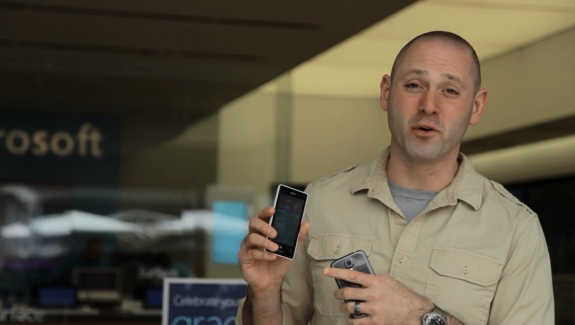 In the video, Rudolph can be seen standing outside of a Microsoft Store, this one being in Century City. After telling viewers that he’d just purchased the Samsung Galaxy S4 without a contract for $750, he then shows of a Nokia Lumia 521, which can be purchased off contract for $125 and asks the audience what else they could get for the $600 price difference.

After consulting with a manager inside the Microsoft Store, he concludes that users can get the Lumia 521, a 16GB MicroSD Card, three months of the company’s Xbox Music subscription service, Nokia Purity earbuds and the Asus Vivobook.

While users can purchase the Nokia Lumia 521 for just $125 at their local Walmart, the Samsung Galaxy S4 is currently sold on the retailer’s wireless website for just $689 without a two-year service agreement, a $61 difference from the price quoted in the advertisement. AT&T’s retail stores offer the device for just $639 without a contract.

It’s worth noting that many users buy a smartphone on contract, paying $199 to $249 for the Samsung Galaxy S4.

Slightly off pricing aside, the ad’s message is clear. By purchasing low-end devices users will be able to save a bundle and use that money to purchase other gadgets that are on their list. Windows Phone is uniquely positioned to make that argument, mainly because Microsoft requires Windows Phone makers to adhere to a specific list of specifications. With it, the company is able to guarantee a more consistent experience for users, even on cheaper devices.

While we haven’t reviewed the Nokia Lumia 521, our review of the Samsung Galaxy S4 did give us the impression that users at all price points would be able to appreciate the device’s hardware. Even if they may not necessarily find the device to be affordable without signing up for a contact with a wireless carrier.