For months, Microsoft has teased what it describes as revolutionary Windows 10 features. Early there was Continuum, the system that allows Windows 10 to change its interface based on whether users have touch. Then the company teased Windows apps and how a single app will work across Windows 10 notebooks, tablets, smartphones and even the Xbox One. Late last night Microsoft added the last piece to another crucial Windows 10 feature, one that could even threaten the dominance of iTunes and give users a decent reason to turn to Microsoft for all their digital purchases. 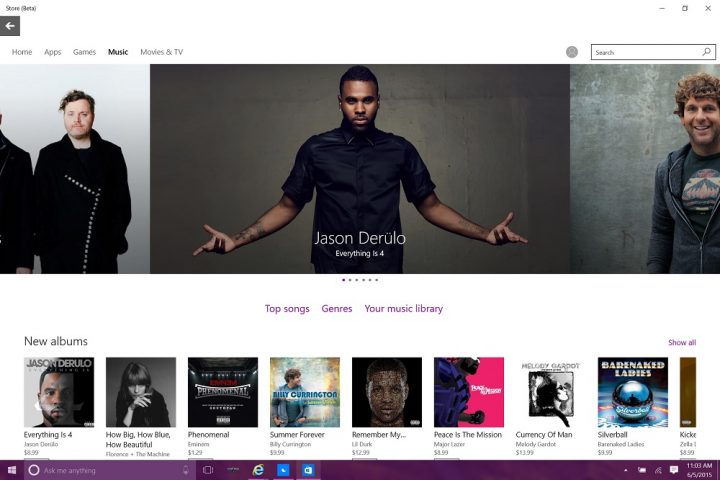 In a post on its Blogging Windows site Microsoft announced that it’s finally turned on the part of the Windows Store that’ll house its music purchasing service. There was already a tab in the Windows Store indicating Music purchasing was on the way, but Microsoft hadn’t turned on the system yet, forcing users to still dive in the dedicated Music app.

The Music store inside the Windows Store for Windows 10 offers singles and complete albums at roughly the same price as they’re available in the iTunes Store. There’s biographical information about each artist and individual album reviews too. The Windows Store even seems to understand music curation at a fundamental level. LPs and singles are broken out into different areas than studio albums. The Windows Store features related artists and albums too.

Every song purchased in the Windows Store is absolutely DRM free, meaning users can play it on any device they own, something that hasn’t always been the case with Microsoft’s offerings on the iTunes Store. Before purchasing, users can sample each track. The Windows Store also offers a pretty robust browser so users can deep dive into the kinds of music they enjoy.

With Windows 10, Microsoft is borrowing Apple’s approach to selling music and extras. Xbox Music, the company’s previous offerings seems to be in the process of being dismantled. The Music app in Windows 10 will handle playback while the Windows store while house apps, games, television shows, movie purchases and movie rentals. In addition to that, Microsoft will continue to offer its Music Pass subscription service. The Explore area inside the redesign Music app will continue to be the only place where Music Pass subscribers can download content with their Music Pass. Microsoft plans to launch Windows 10 upgrades on July 29th.

With the Windows Store, Microsoft is playing the long game. The appeal of the iTunes Store is that it’s one curated place where iPhone and iPad owners can purchase everything they need. What makes Microsoft’s move interesting is that a huge number of iPhone and iPad users have Windows machines. Microsoft is banking on users who download its free Windows 10 update venturing into the Windows Store to find a game or app and discovering the company also sells music and video. Buying content there should be easy since Microsoft makes it impossible to use most of Windows 8 and Windows 10’s features without a Microsoft Account. The more people buy from the easy to use and less bothersome Windows Store, the less likely they’re able to keep opening iTunes, which is an outright disaster on Windows.

Read: Why You Should Reserve Windows 10

For the trick to work, Microsoft will need to be better at music and video curation. It’ll also need to improve on its media offerings through the Windows Store. The iTunes Store offers music, movies, television shows, podcasts and digital courses through iTunes U. Microsoft has done a pretty poor job supporting podcasts in the last few years and doesn’t offer any books in its own store at all, despite making tablets of its own.