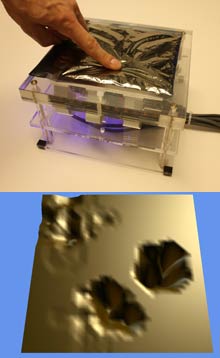 MIT’s Technology Review gives us a glimpse of the future in an article about Microsoft’s tactile interface experiments.

Basically, using magnetic sensors to detect and track disturbances in a magnetic fluid or ferrous material suspended in a fluid held in a bladder, input can be obtained from a user by shaping or prodding the bladder, which can be used for a variety of purposes from simple pressure input to 3D sculpting. Feedback is possible by applying a current that pushes back against the fluid.

The potential for such fields as animation, construction, fabrication, and medicine are tremendous, allowing for tactile feedback in the shaping and manipulation of virtual objects. I also see even greater potential for misuse in the home entertainment industry. I leave that up to your imagination.