Making the decision to upgrade to Apple’s iPhone 5s is going to be more complicated for those on Verizon’s wireless network. Today, America’s largest wireless carrier slashed the price on the Lumia Icon, Windows Phone’s latest direct iPhone alternative.

Verizon apparently slashed the price of the Lumia Icon sometime recently, making the iPhone alternative available with a two-year service agreement for just $49.99 up front. That’s a huge discount, when the phone debuted it cost users $199 with a two-year contract — the same price as the iPhone 5s.

Unfortunately, Verizon didn’t lower the price of the Lumia Icon for users who want to upgrade faster through its Verizon Edge program. The Lumia Icon will still cost users $27.49 a month through the program. Verizon Edge allows users to get the latest smartphones and upgrade more frequently than they could with a plain two-year contract. Verizon splits the full cost of the phone into 20 monthly payments, though users can purchase a new phone and trade in the device once they’ve paid 60% of its final price. In the Lumia Icon’s case, getting the phone without a contract would cost users $549.99. 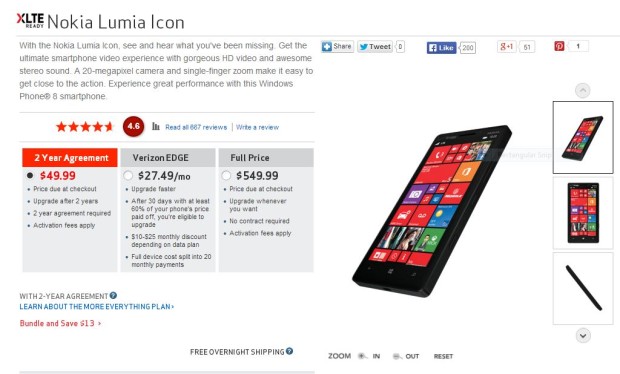 That the Lumia Icon is a bit cheaper for users on Verizon is huge. In theory, a cheaper price tag will make it harder for those considering iPhone alternatives to not purchase a Windows Phone. That’s exactly the market Microsoft needs to be appealing to if it ever hopes to become a closer third-place contender to the iPhone and Android. Most industry insiders agree that for a device to really challenge the iPhone it can’t just have competitive internals and an experience users can get anywhere else. It also has to be priced lower.

It doesn’t hurt that Verizon users purchasing the Lumia Icon are getting a pretty decent iPhone alternative hardware-wise. Gotta Be Mobile found that it was a great smartphone for just about anyone during its time with it earlier in the year.

What truly makes the Lumia Icon a legitimate iPhone alternative are the extras it includes. It has a microUSB port, but users can purchase wireless chargers and never have to plug in the device. The display also uses a touch technology that allows buyers to operate it even with gloves on.

Finally, the Lumia Icon blows the iPhone 5s out of the water when it comes to capturing memories. The camera on its rear has a 20 megapixel sensor compared to the 8 megapixel iSight camera included in the iPhone 5s. Pictures and video captured with the rear-facing camera on the Lumia Icon should out class even other high-end iPhone alternatives like the Samsung Galaxy S5 and the HTC One M8. Users are able to get better shots in situations where they’re moving thanks to built-in optical image stabilization too; that’s something else that the iPhone 5s doesn’t have.

When you’re capturing video you also want to actually be able to hear what’s going on. Video captured with the Lumia Icon will sound better than other iPhone alternatives, not just look better. Nokia packed four separate microphones into the Lumia Icon. This way users are able to better hear the subject of videos and not just see them.

Despite it being one of the best iPhone alternatives available, in the United States the Lumia Icon is only available on Verizon’s network. Worldwide the device is known as the Lumia 930 and comes in orange and green in addition to the black and white variants that Verizon offers.