Microsoft published a new section on its Windows 7 micro-site yesterday and in my opinion it falls flat. The new ‘PC versus Mac’ page doesn’t have a lot to it and there’s very little substance. Are PCs better than Macs in a lot of ways? Absolutely. Unfortunately, Microsoft put very little effort into highlighting those advantages or really comparing Macs to PCs.

Instead, it looks like Microsoft had some overworked marketing guy write the copy on his lunch break. The poor copywriter, probably had some really good stuff in there, but then there was probably a meeting or two between his boss, legal and the PR department.  They probably didn’t want to bother with getting hardware partners to sign off on including their products in the page. Hence, they didn’t bother to show any PCs, in the PC vs Mac page: 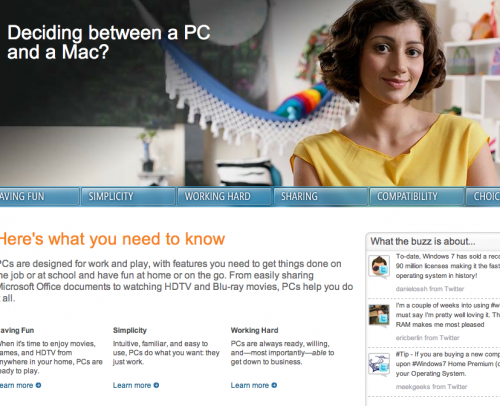 The main page of the section has a photo of  a smiling lady with some clutter on white shelves in the background. I assume she’s supposed to be welcoming, but is she a Windows 7 user? Is she a business owner standing in a store? Or is that just a cluttered shelf in her bedroom? A Twitter feed pulls in Tweets about Windows 7 in a lame attempt to make this page look less corporate or something. There are six bullet points that are supposed to sway people thinking about whether to buy a Windows 7 PC or a Mac. They are:

I clicked on each of the items, expecting to find a bunch of information comparing PCs to Macs, but instead there’s just a few lines of words. Instead of promoting specific PCs or slamming Apple for its shortcomings, there are these gems:

If there’s a Mac version of a program you need, you’ll have to buy it again and relearn how to use it on a Mac.

Yup, that’s it. That’s the best Microsoft, with its billions of dollars can do to promote Windows 7 against Macs, which are grabbing a larger share of the notebook pie, especially on the high end of the market. 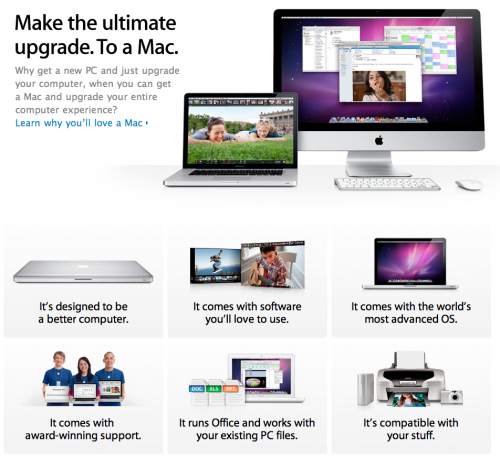 Compare this to the section of Apple.com that highlights the advantages of Macs to PCs. There are rich sections on topics ranging from hardware and software, to compatibility and support. Each page on this section of Apple.com has several hundred words, graphics and photos  making the case for why you should buy a mac. There are links to videos, such as this one promoting Time Machine, and tutorials, such as this one explaining the Finder. Apple’s case for why you should buy a mac is complete and cohesive since the company wants to sell you both hardware and software in one bundle (a Mac).

Microsoft needs to take off its gloves if it wants to win the battle over consumers are on the fence about buying a Mac or PC. I have the pleasure of using a lot of good PCs as well as a couple of good Macs. There’s a lot of things I can do with my PCs that I can’t do on my Macs, but Microsoft didn’t bother to effectively highlight them on what should be an influential micro-site. There are no demos or photos of what consumers can actually do with Windows 7 that they can’t do with a Mac. There’s no mention that you can save hundreds of dollars by going with a PC versus a Mac. There’s no mention that of how PCs are actually used out in the real world. How about a section explaining that virtually every major animated movie production company uses PCs to author their films rather than Macs? How about explaining that the most powerful,smallest, biggest and cheapest computers out there are PCs?

It’s reasons like these that Microsoft is losing consumer mindshare.