Microsoft may have reappropriated the name of their old surface computing initiative, but that doesn’t mean they’re done with the project. Their purchase of Perceptive Pixel, a giant touchscreen computer maker, points to big things to come.

With models ranging from 27″ to a whopping 82″, the touchscreen computers of Perceptive Pixel are a few pounds heavier than the portable Microsoft Surface that recently debuted, but they are right in line with the former Microsoft Surface, the multi-touch table system rebranded as PixelSense, albeit with a vertical orientation. 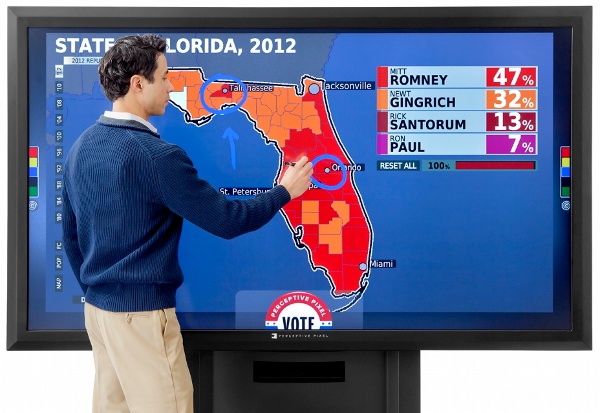 If the big one looks familiar, that may be because you’ve seen it on CNN covering the 2008 U.S. elections. Perceptive Pixel Inc or PPI (so clever) primarily serves industry clients, such as government, defense, broadcast, energy exploration, engineering and higher education. However, as a result of the acquisition, PPI founder Jeff Han claims they aim to “deliver this technology to a very broad set of customers.” 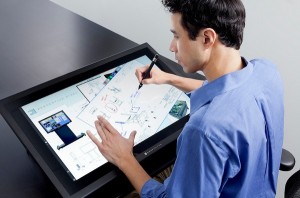 In addition to the size of their products, PPI touchscreens have one other special feature: simultaneous pen and touch. Called “Active Stylus” this technology allows the system to differentiate between pen and touch input when used at the same time. In addition to palm rejection, it allows such interactions as moving a virtual sheet of paper with one hand while marking it up with the pen. Microsoft Research has also shown this technology, making this merger all the better-fitting with Microsoft’s PixelSense and multi-touch products.