A new advertisement from Microsoft leaked this morning. It skips most of the long winded explanations that we’ve seen in Microsoft’s Scroogled videos and goes directly for Google Chrome, complete with a comically bouncing Chrome logo and classical music.

That video, which leaked to the web this morning, declares that with the Google Chrome web browser “everything is tracked” using wording that appears next to a spinning Chrome logo, giving the viewer the feeling of always being watched. Throughout the video animations of Google taking money out of user’s pockets, and watching users where ever they are, appear in short bursts. 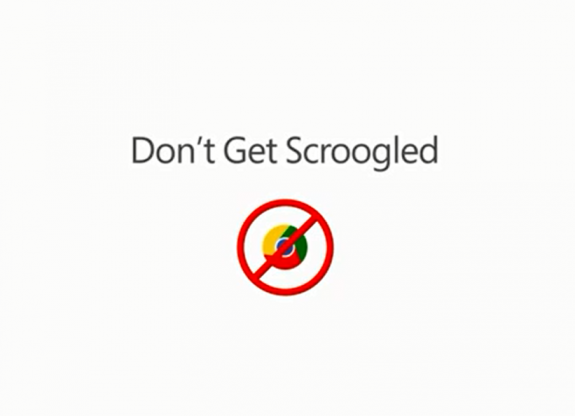 Interspersed words in the video read, “With Google Chrome, everything everywhere is tracked, to target you with ads, to monetize your personal info, even when you are [in bed, at the doctor and in the bathroom], Google watches everything you do, [regardless of devices], and uses it to make a profit off of you. Chrome has you commercialized, following you, monetizing you, everywhere. Don’t Get Scroggled”.

While, according to The Verge, this advertisement was never meant to be public, the ad uses the same tagline and delivers the same message the company has been hammering Google with in publicly available videos on YouTube. These include two videos that were released last month, one of which claimed that Google passed on the private information of users to developers via the Google Play Store.

These new ads come just a day after Google CEO Larry Page declared that technology companies should be focusing on working together to innovate and that its relationship with Microsoft was problematic. He went on to call Microsoft’s attempt to attract users to its Outlook.com web service by supporting Google Talk, “sad.”

Google then asked Microsoft to “immediately withdraw” the YouTube application the company created for its Windows Phone Platform, according to The Verge. It also wants the company to “disable existing downloads of the application by May 22nd.”  Google maintains that since the application blocks advertisements, it is causing harm to YouTube.

Read: YouTube Caught in the Middle of Google-Microsoft War on Windows Phone

While that might be true, it’s not entirely accurate. Since Google publicly stated that it would not be developing any applications for any of Microsoft’s platforms including Windows Phone, the company took the matter into its own hands. The application doesn’t include advertisements because Google refused to give them the access they needed, according to Microsoft.

Whether the two will reconcile their differences in the way Google and Apple have remains to be seen, Google does produce applications for Apple’s iOS platform. In fact, the company announced a revamped Google Maps application yesterday at Google I/O.